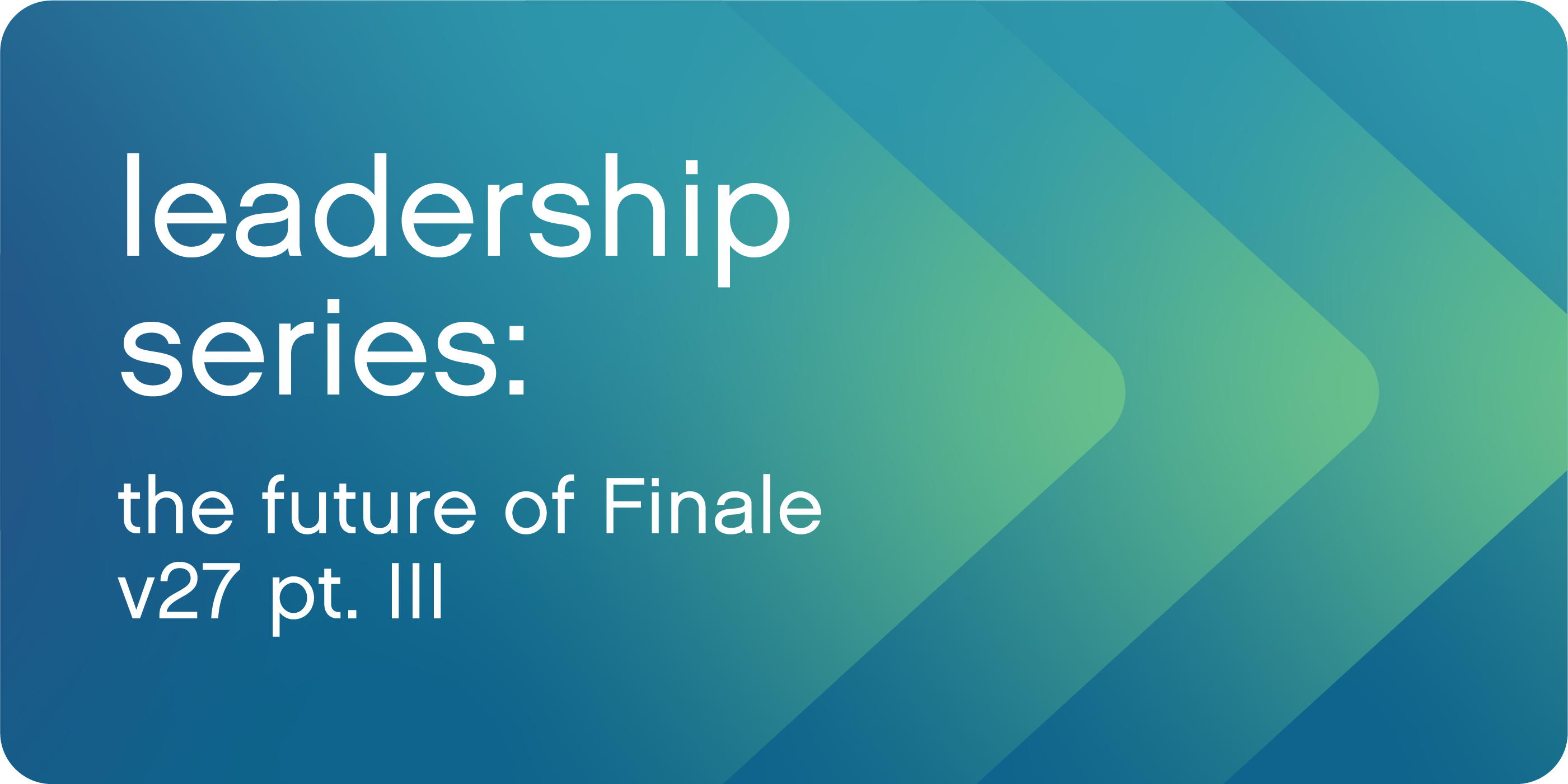 Hello once again! In this final part of my excursion into what’s on the horizon for Finale v27, I’d like to take the longer view of what we’ve been working on. As mentioned before, the Finale team, primarily occupied with getting the 27.1 release ready for you, is also well into planning for future Finale releases. So what should you expect from us in the coming months?

As we revisit the features we focused on in 27.0 throughout the v27 dot releases, we’re relying on your feedback to help us prioritize. Iteratively delivering additional functionality depends on this, helping us to think less in terms of packaging up a specific release and more toward solving customer problems more meaningfully with each piece of work we take on. We’ve been conducting surveys and individual user interviews to gather your ideas and your frustrations, and we welcome your participation on our community forums (yes, we do actually read what you’ve written).

I believe that this approach can help to address the unfortunate but justifiable ongoing perception that a new version of Finale often includes partially-implemented new features. By incrementally building out the features according to what would actually be the most helpful to you, we’re making good on our promise to follow up on base capabilities.

Building on a legacy

But that indomitable legacy never means that we should rest on our laurels. Finale works for a wide range of musicians, both amateur and professional, who use it to get the job done. It’s an ambitious thing to try to be useful in so many ways. And it means that we have to continually ask ourselves: what does Finale already do well? What could it do better? What doesn’t it do that would help users do their best work? I’d like to tackle each of these questions.

Finale’s output is already world-class. We’ve known for years that the choices we make in the product affect the course of Western notation (no pressure, right?), so we have a duty to ensure that the quality of what people produce using Finale’s defaults only gets better with time. It’s a beautiful thing when the first readthrough of a piece in rehearsal or individual practice is successful thanks to unambiguous, precise notation.

It’s no secret that the only way to find and prioritize the targeted improvements that increase user efficiency is by spending time with actual music creators. It’s amazing what you learn by simply sitting with real people going through their daily grind, developing a deep and authentic understanding of what they’re trying to get done. This is one of my favorite parts of the job, because it gets us out of our own heads and keeps us grounded.

Then there’s the matter of what’s missing in Finale for people who want to make music. Our most recent answer is that making music means bringing people together, which is at least as important now than it ever has been. I know I’ve been craving more human connection over the last 18 months. The way many of us experience and make music together is changing. Using a tool such as Finale is just one facet of being a musician, so we won’t keep the application isolated, ignoring the bigger picture. With major efforts in v27 like SMuFL support, MusicXML 4.0, and Sharing, we’re attempting to be part of that larger, more holistic context.

…Which brings us back to the three big ideas I posited in my first post two weeks ago. We’re branching out with the recognition that notation, while essential for many types of music, is just the beginning. It’s part of the evolution of your expressive idea. The goal is to bring your music to life, often in concert with others. v27’s Sharing feature is us acknowledging that it should be easier to get to making music together; we’re doing that by enabling an interactive practice experience centered around the notational language we use to convey musical meaning to one another. And we’ve only just begun.