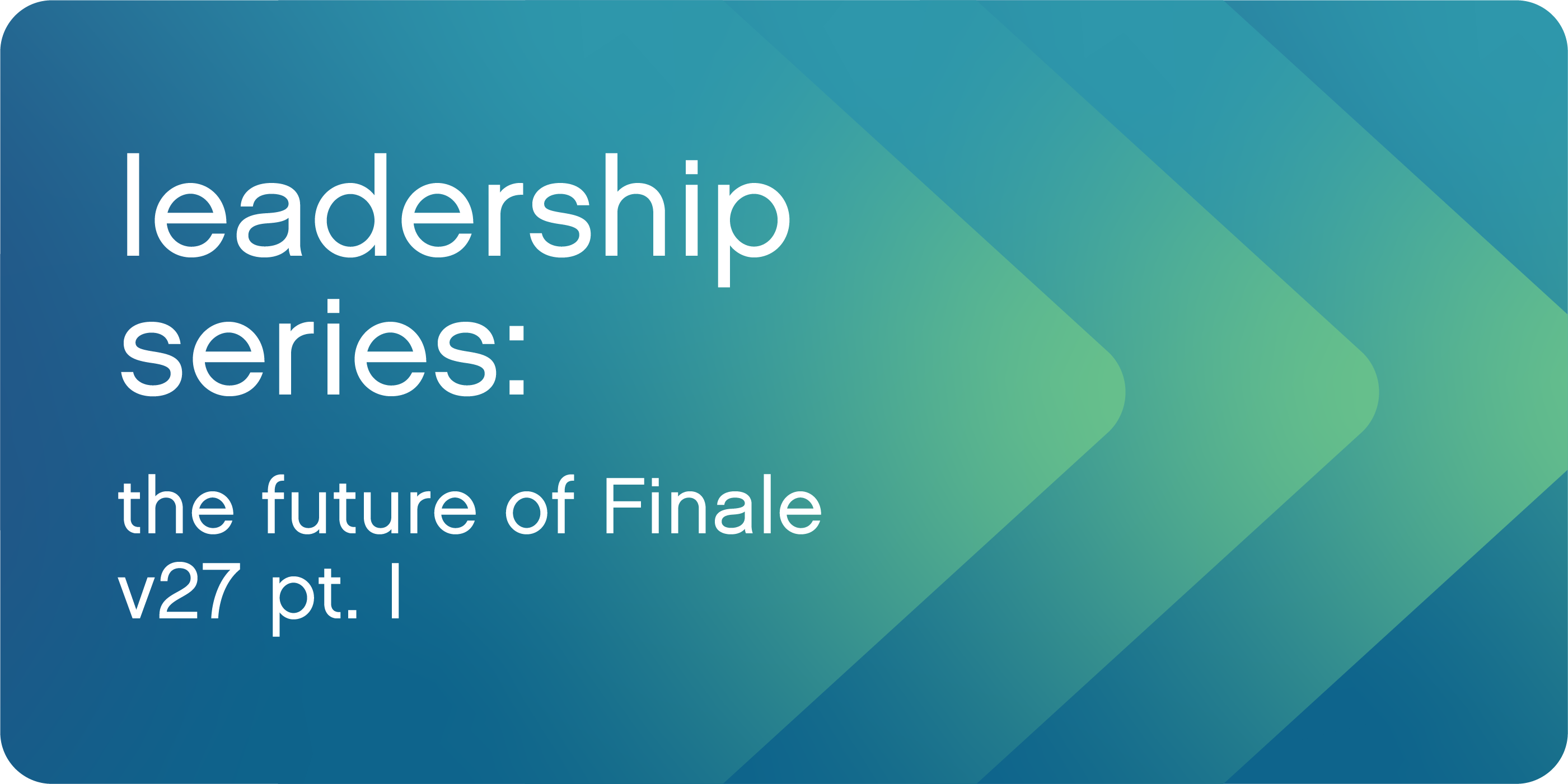 We’ve had so many great responses to the Developer Roundtable livestreams we’ve been hosting since the release of Finale v27 that we’ve asked Jon Tschiggfrie, Product Manager, Audio/Notation at MakeMusic, to follow up with some more details about what users of v27 can expect in the coming months.

Product managers wear a multitude of different hats working with their teams. Perhaps the part of my job I find myself spending the most time doing is planning – planning for an upcoming Finale release, planning a project that will involve multiple development teams, planning messaging with my marketing colleagues – and then validating those plans and revising. This always involves some level of what we call “ruthless” prioritization, which itself would be a topic for a whole other blog post!

It also involves a question that colors everything I do (and one that our users love to speculate about): what is the future of Finale? Friends, that is one hell of a question. I think about it literally every day in this job. It informs not only my long-term planning and our overall product strategy at MakeMusic, but also nearer-term planning activities as well, directly impacting each member of the Finale team and, most importantly, every user of the product.

With the release of Finale 27.0 in June this year, we focused on responding to three big ideas, establishing the direction we’re taking for the future:

It’s that third big idea I want to bring you inside on today. Certainly, the team and I are currently engaged in planning for later Finale versions, but what is the immediate future of Finale? Let’s break down what’s coming next for v27.

We’re getting close to having a 27.1 release ready for you, but before we do, I’d like to speak to how I’ve been thinking about the v27 lifecycle. In the past, we referred to subsequent releases within a major version as “maintenance updates”, emphasizing that they were meant to keep the lights on and to ensure that Finale lives up to the standard of quality our users expect. This usually meant primarily technical or OS-specific updating and bug fixes, respectively. This type of maintenance will always be important and sometimes also urgent, and I have no intention of ignoring this critical work.

Still, I know our users want more. That’s why we now build on the major themes of each major version in the following updates with feature improvements, in addition to the under-the-hood architecture work and squashing bugs. Officially (whatever that means), these are termed “minor versions” in comparison with “major”, but internally we use the colloquialism “dot releases”, referring to the “.” character in our versioning scheme. [Ever wondered what the four numbers in a Finale version mean? Its format is our interpretation of a numerical sequence that’s relatively common in the software industry. As an example, the last public release of v26 on Windows was 26.3.1.520, which can be decoded as major version 26, minor version 3, hotfix 1, and build 520.]

Dot releases give us a chance to continually deliver user-facing value throughout the life of a major version instead of having to jam it all into a major release and increasing how long it takes to create the new version. By doing research with actual Finale users, we can create an iterative approach to new features where the first release in a major version includes the essentials and each dot release makes those features even better with additional or expanded functionality. When you buy your license or upgrade to v27, you’re not just getting the initial release: you’re getting all the time-saving features and fixes that happen throughout the v27 lifecycle.

We’ll pick up on that note next week as I detail for you what you can expect in the v27 dot releases, which start with the forthcoming 27.1, already four months in development.