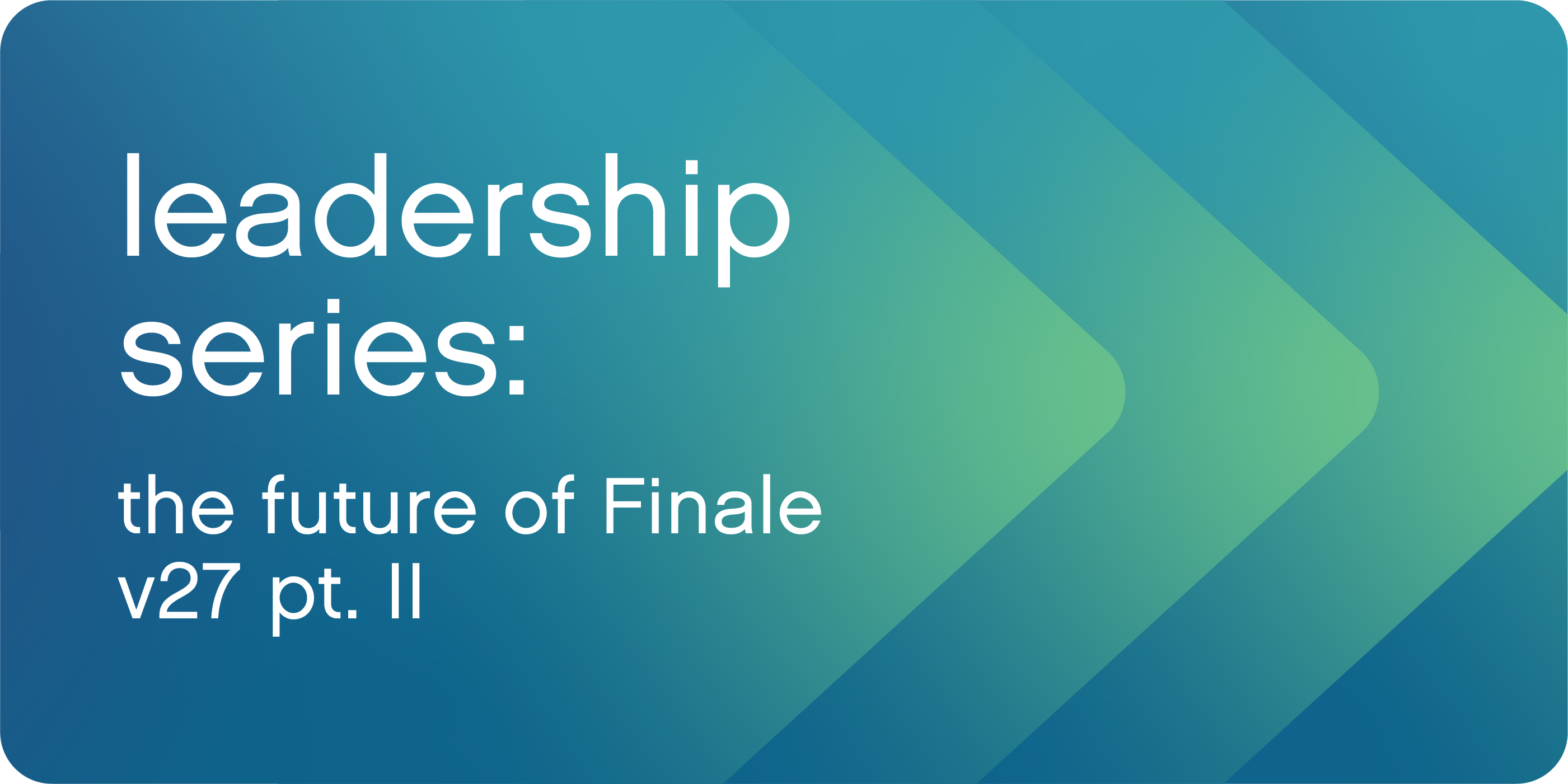 Hi there. When we last spoke, I was waxing philosophical on the big ideas we were speaking to with v27 and the reason we see the delivery of additional user value in the dot releases as an imperative. Now that the high-level view is out of the way, let’s get down to brass tacks: what will owners of a v27 license see in the upcoming dot releases?

Our goal with Finale’s new Sharing feature was to help close the gap that has always existed between creating a notated document in Finale and actually making music with others. To make the experience of sharing your creations more delightfully effortless, over the next few months we’ll be simplifying the sharing flow in Finale compared to what you saw in 27.0. We’ll also continue to talk to you about what else you’d like to see the Sharing feature do.

This is an area that I’m really fired up for personally. SMuFL’s structure empowers Finale to more deeply understand the meaning conveyed in musical symbols, opening up a huge range of functional possibilities. We covered our many reasons for supporting the SMuFL standard in our recent developer roundtable, and I discussed a bit about what’s next in a recent blog post. To reiterate, our top priorities include:

One of our aims with v27 was to make improvements that are essentially invisible, which is squarely where the changes to instruments fit. We have a small number of high-importance instrument fixes coming in 27.1, getting us closer to the goal of “they should just work” (whoever uttered that phrase first sure caused a lot of headaches for the rest of us). Our developers spend a significant portion of their time fixing long-standing issues, and the silent gains made here are evidence of that commitment.

One of the most important things we do as a development team is to prepare the product to work well when new operating systems are on the horizon and when computing hardware starts trending in a new direction. Admittedly, at times we’ve been more reactive than proactive, which is why we view this as a core function of our jobs today.

For Windows users, we’ll keep chipping away at the slate of display scaling improvements that we first delivered in 27.0 so those using hi-res monitors can work efficiently in Finale. We’ll also follow up on ensuring high-quality PDF export, and comprehensive testing on the development previews and release version of Windows 11 was undertaken.

For Mac users, as always we’ve paid close attention to the new macOS 12 Monterey, with frequent testing on the beta builds from Apple and subsequent release version. We’re also quite pleased with Finale’s performance on M1-powered Macs – in many cases, it’s actually better than on Intel-based machines – and we are working toward becoming a native Apple Silicon application as well. And finally, we intend to get back to making the experience in Dark Mode more complete.

But this isn’t everything we have planned. You’ll also see more of what we’ve started calling quality-of-life improvements, things like: a list of commonly-reported bugs that we intend to squash; making the Spanish-language Finale application and its complementary components as comprehensive (yay alliteration!) as its English cousin; and a surprise we’ve been itching to share related to add-on functionality that we think power users and even not-so-power users are going to like.

Stop by next week when I wrap up with some parting thoughts on what making music is all about, where Finale is headed, and why you are a crucial part of that future.