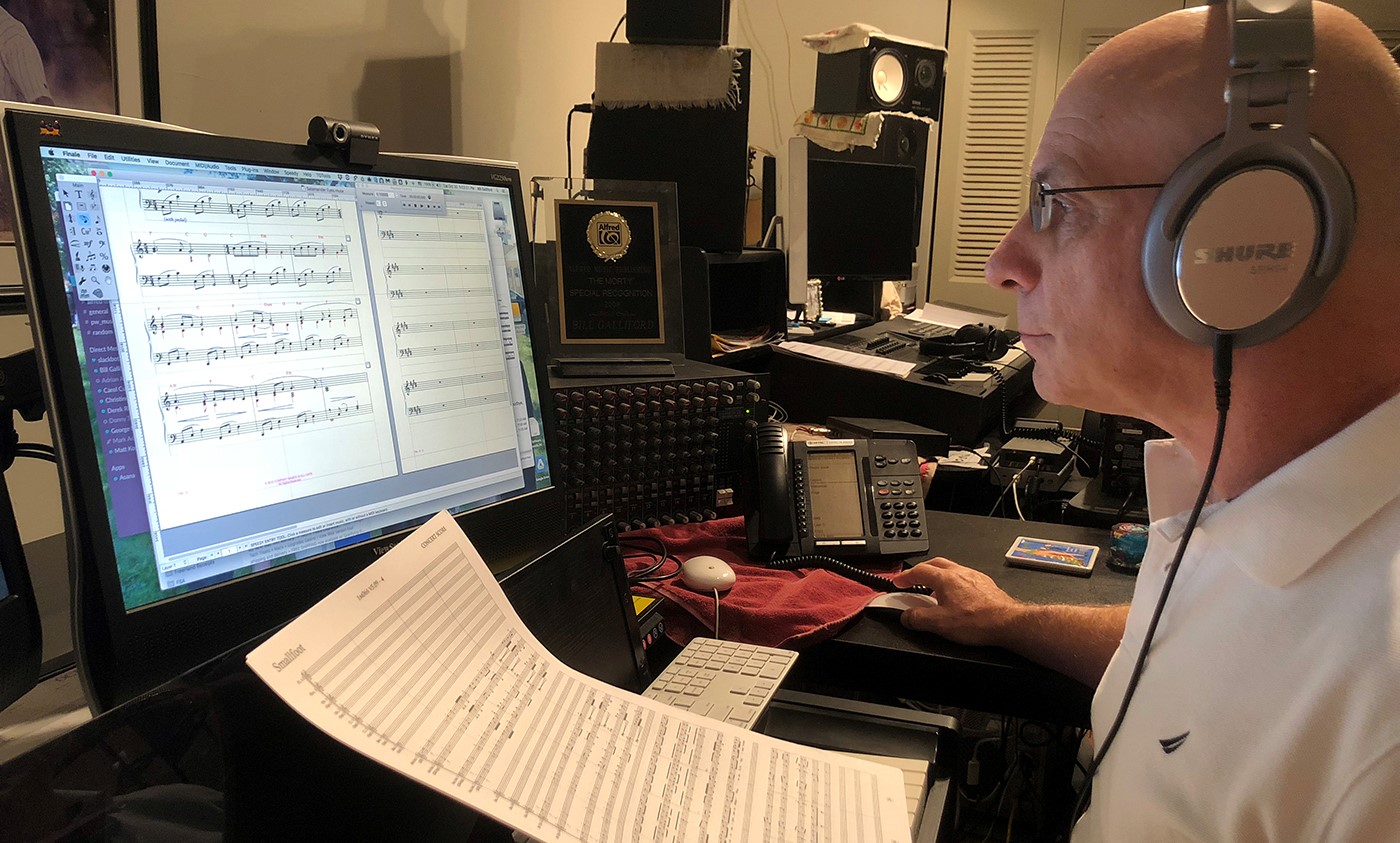 While the Finale blog often places the spotlight on musicians who work in film and theater, posts featuring users in the publishing world are less common, despite the fact that so many rely on Finale’s ability to engrave practically anything that can be imagined. Because MakeMusic and Alfred Music are both part of Peaksware, I didn’t have to travel far to take a first step in rectifying this inequity. Bill Galliford is the director of instrumental solo strategy at Alfred, and he was kind enough to explain what that means, share his favorite engraving resources, and even tell a Wynton Marsalis story.

What does a director of instrumental solo strategy do?

I’m into my second year in this new role, which continues to evolve. My primary focus is to manage, develop, and produce instrumental solo content for Alfred, as well as oversee solo content from the Belwin catalog. Over the last several years, I’ve been involved with the arranging and production of several instrumental solo series with content ranging from classical themes to popular movie titles and current pop and rock songs.

We’re always finding new ways to utilize song material available to us through publisher agreements. For instance, we have a long-term agreement with Warner Brothers Entertainment, which covers all the great movies from their catalog, as well as current and upcoming movie releases. So we have access to music from the Harry Potter film series and the Lord Of The Rings trilogy, to name a few. We’re currently working on the music for A Star Is Born, which we expect will be very successful given the popularity of the movie.

Although Alfred is primarily focused on educational content, there are times when we’ll be asked to create piano/vocal content for current pop and rock content. A Star Is Born is one example of this. I’ve also been asked to help provide new content for SmartMusic.

How did you get your first gig at Alfred?

I actually began my career in November of 1981 when the company was called Columbia Pictures Publications. In the summer of 1981, I had just finished my master’s degree from West Virginia University and was looking for work. I’d been playing various gigs and club dates in my hometown of Pittsburgh when I received a call from Robert Schultz, who knew of my transcribing skills from our time at WVU. He had just been named music director at CPP and was looking for another piano/vocal arranger to join their staff.

So, I packed up my 1972 Dodge Dart and headed for Miami during Thanksgiving weekend. Four acquisitions later, I’ve survived the long road (37 years this month) and am now a proud member of the Alfred/Peaksware team.

How has your role at Alfred evolved since then?

Beginning as a piano/vocal sheet music transcriber/arranger, I gained a lot of experience and knowledge with the wide range of music I was asked to arrange, as well as learning notation and engraving requirements.

As the company evolved and changed management, roles within the organization changed. I was fortunate to be asked to take on the role of manager of arranging. This included overseeing the arranging department and all the newly produced pop piano/vocal titles.

A few years later, I was also asked to oversee the production of pop instrumental solos, which included 3 to 4 series each year. So over the years, with the help of a great staff of arrangers and series contributors and consultants, we’ve been able to establish a successful series, which I believe led to my new role.

Have a favorite story about working with a famous musician?

During my time under the Warner Brothers Publications management, we were asked to create a series of books for Wynton Marsalis. We produced two; Standards and Ballads. This involved transcribing some very intricate arrangements including his amazing solos.

Usually, we send manuscripts (Finale or written scores) to the artist or composer and they send us back corrections. Wynton wanted a more personal approach, so he took a train from New York to Miami (he doesn’t like to fly), and we spent a day going through all the music. I had to pinch myself several times, to think I was working in close proximity with such an amazing talent.

What was your introduction to music notation software?

In 1988 a few representatives from what was then Coda Music brought us a copy of a new software program called Finale. They gave us a demonstration, spent some time helping me get started with it on my new Mac SE (with a whopping 20GB hard drive), and I’ve been using it ever since.

It took a while for our company to adopt the program. But after a few years of Finale’s development, and enhancements in computer technology, it became part of what we do.

Finale version 26 is here. Now you can try it for free!

Are there engraving textbooks you recommend?

There are two main books that I consider the Holy Grail of engraving practices. First is Music Notation: A Manual of Modern Practice by Gardner Read. This is probably the most popular book on engraving, adopted by most publishers and educational institutions. Another great book that I was weaned on early in my career is by Ted Ross, titled The Art of Music Engraving and Processing.

What advice would you give a young musician today who might be interested in following in your footsteps?

As a musician, you often are exposed to a variety of musical styles that require different sources of knowledge and expertise. When I attended a university for my music education, I was exposed to everything from strict classical training, to jazz and pop styles. Some of the training I liked, and others, not so much. The music history courses were especially challenging – I never thought I’d use any of this knowledge again.

Not true! In my career, there have been many times I’ve gone back to research specific areas of my education to address issues for new arranging projects.

So, my advice to any young musician is to not dismiss any experience, even one you might not think is helpful at the time. You never know when a situation might arise where you need to utilize that information.

Also, experiencing and learning a wide variety of musical styles can only expand your horizons. In my college days, there’s was always a battle between the “legit” world, and the jazz or pop world. I was classically trained in piano performance, but my experiences in the jazz and pop world have given me a career.

Many of the movie scores I’ve arranged and transcribed for various music formats have combined classical and jazz/pop elements. So my experience in both genres has been invaluable.

What music most moves you?

I really love to listen to and arrange/transcribe movie scores. There’s something about hearing a score and visualizing the story through the music that engages my imagination. I’ve had the honor of working on several John Williams scores – he’s a master at creating character themes that accurately depict the particular character, and themes for scenes that depict the action.

Dave Grusin’s score to On Golden Pond is one of my favorites. The film revolves around the difficulty of aging. It opens with a scene of a New England lake, with close-ups of blossoming trees in the spring and the sound of the mallards arriving from home from their long winter retreat. The music opens with simple high piano motifs that almost depict the opening buds of leaves on the trees.

As the score continues the music reflects the evolving emotions that occur as loved ones age. That’s a difficult task for a composer, but Grusin draws you in from the very start.

I enjoy hearing scores like this where I can visualize the story just by listening. I’ve been fortunate over the years to work with scores of the some of the most brilliant composers of our time, that have this ability to depict a story through the music.

I’d like to thank Bill again for sharing his experiences. Like so many of us, he found a way to incorporate music into his professional life in a way that he could have never foreseen as a young student. I hope our kids (and their kids) can similarly find ways to simultaneously enjoy their work and passions: cue the simple high piano motifs!