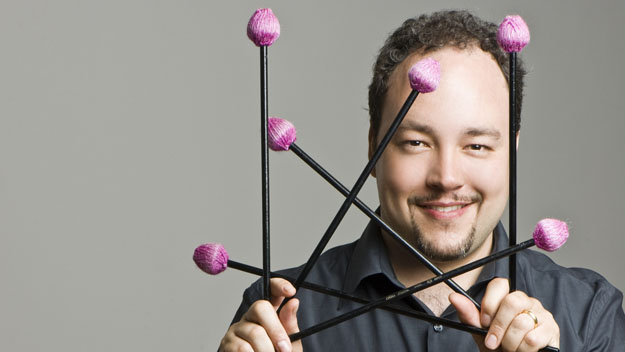 In our last post we met NYC-based composer Robert Paterson. Today we conclude our interview, see an example of his excellent Finale work, and learn more about his most recent recording, The Book of Goddesses, which earned him a Composer of the Year Award from the Classical Recording Foundation.

SY: Could you describe your music, or your musical goals?

RP: I think of my music as contemporary classical concert music, for lack of a better phrase, so I focus on writing music for people to sit in concert halls and enjoy. I would describe my music as oftentimes energetic and colorful; I focus a lot on timbre and color.

I am also obsessed with form, so I try to create pieces that feel like, as you get to the end of the piece, there is never a dull moment where you lose focus. If people say to me, “Oh, there was never a moment where I dozed off,” then I’m happy. [laughter]

SY: That seems more honest that most composers might be willing to be in an interview; most would feel compelled to claim that they’re out to change people’s lives or something grander.

RP: You know, there are some pieces you listen to where there are whole swaths where you kind of float in and out. As much as possible, I try to engage listeners’ interest for the entire duration. Obviously, as you write longer pieces, this becomes more difficult.

I also really enjoy writing pieces that performers like to play. I am not the kind of composer who thinks of performers as automatons or technicians – I like to think of them as my colleagues and that the whole creative experience is a team effort. I like to think of composing as something you do with performers and not against them, not as a solitary effort.

I think that music is a very communal experience in the best possible way. If you go to a really good performance and the performers are happy and enjoying themselves, and they’re getting into the music and nothing is holding them back (whether it’s the notation or how they feel about the music itself), it makes the audience enjoy the performance so much more. And they’ll want to experience it again. My goal in life is to make people fall in love with that experience.

SY: Let’s talk about the music on your new CD, The Book of Goddesses.

RP: I am really proud of this album. It was three years in the making, so it was definitely a labor of love. It contains three chamber pieces. The first, The Book of Goddesses, is in nine-movements and was written for MAYA, an amazing trio based in New York City. It is scored for flute, harp, and percussion, and the percussion part is primarily hand drums. Writing for hand drums was a little out of the ordinary for me, as I usually write for classical percussion instruments, but it was a lot of fun. The whole work is meant to be choreographed. Each movement highlights a different goddess from a different region of the world, and the music reflects this. [View an excerpt.]

The second piece, Freya’s Tears, was written for Clockwise, a violin and harp duo in New York and is related to The Book of Goddesses. It’s like a sister piece, for violin and harp.

The third piece, Embracing the Wind, is scored for flute, viola and harp. This piece has been played quite a bit, as I wrote it quite a while ago. On this recording it’s performed by the American Modern Ensemble [of which Robert is the founder and Artistic Director].

SY: You mentioned the communal experience, of the composer and the performers, in the creation of music. One performer on the CD links all three ensembles heard on the disc.

RP:  The line that runs through all three is harpist Jacqueline Kerrod, who is in the American Modern Ensemble, Clockwise, and is a former member of MAYA.

RP: Perhaps an unsolicited plug. I feel strongly that Finale is the best software program out there for making your music look as beautiful as you want it to look.

I’d like to congratulate Robert for winning the Composer of the Year Award from the Classical Recording Foundation and for sharing his thoughts with us.

What are you creating in Finale? Let us know by clicking on “Comments” below.