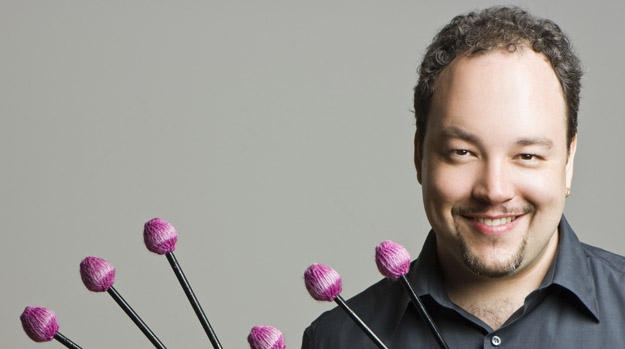 This week we meet composer Robert Paterson. Based in New York City, Robert is currently the Music Alive composer-in-residence with the Vermont Youth Orchestra Association. His latest release, The Book of Goddesses, garnered him a Composer of the Year Award from the Classical Recording Foundation. Learn more about his many awards, commissions, and performances at robpaterson.com (and note that he’s not the Finale plug-in creator and composer Robert G. Patterson).

Scott Yoho: What was your introduction to composition?

Robert Paterson: When I was a kid, my parents used to take me to new music and other classical concerts. My dad was a sculptor and taught at the State University of New York at Buffalo. So I grew up seeing people like John Cage, Morton Feldman, Lejaren Hiller and all kinds of other musicians all the time. I was used to that, and thought this was normal, and that all kids did this.

In my early teens I began studying composition with Puerto Rican composer William Ortiz, and he was influential, but my high school teachers were also really supportive of my composing habit. I definitely have a lot of gratitude for them now as a professional composer, and I think about my background quite a bit as resident composer with the Vermont Youth Orchestra. I’ve visited many schools and I always talk to teachers about how important it is to support students who want to compose, even if it seems a little out there for them.

SY: What was your introduction to music notation software?

RP: I am one of those people who have been using Finale from the very beginning, from version 1.0: I transitioned over from something called Professional Composer…

SY: I used Composer too – you could have any beam angle you’d like, as long as it was perfectly horizontal! [Laughter followed by tales of horrible ink jet printers and tearing of tractor-feed paper…]

RP:  Once Finale came around you could tell it was going to be a different ball game, and I’ve been using it ever since. While at Sarah Lawrence College I taught a course in notation with Finale and Sibelius side by side. We would often do experiments with the students; creating a page in Sibelius, and then trying to do the same thing in Finale, and comparing the results.

This emphasized even more for me how much I really enjoyed working with Finale and didn’t really enjoy Sibelius. I always felt like Sibelius threw up a lot of roadblocks: Almost like somebody was slapping your wrists when you tried to do something out of the ordinary. Whereas in Finale, if you come up with a crazy idea or something that’s a little out of the ordinary that’s just not common, it’s easy to do.

I think that Finale is a much more open-ended program that allows composers to be more creative.

SY: Can you describe your work process?

RP: I began writing music before there was notation software. All along my process has been to sketch by hand with pencil and paper, then move to the computer to notate. A lot of composers nowadays don’t do that at all. While I want to transition over someday [to composing directly on the computer], I am waiting for a large-format touch screen that’s easy to use with a MIDI keyboard, because I don’t want to have a computer keyboard in front of me.  I’d rather use a stylus or my fingers. I don’t want to have too many interfaces between me and the music, but that’s just the way I think about it and everybody’s different.

SY: When we spoke before, you said that because Finale can, for example, let you make feathered beams look exactly the way you’d like them to, you might be tempted to do that as you compose, whereas if you simply sketch it, you just capture the idea and move on.

RP: For me, what is most important is that the ideas flow as I invent them without having to worry about how I am going to notate them. Knowing that Finale will be able to notate anything I write means I never worry about whether it is possible. I like to focus on the composition first, then concentrate on the notation later.

SY: What are your goals when notating music?

RP: I don’t want the performers to think about how the music is notated. In fact, the less they think about that, the more I feel like I’ve done my job. I want the notation to be so clear that there is nothing about it that distracts them from making music. I think a lot about how to make everything look clean and precise and as conventional as possible.

On the issue of transparency, I think of film composers. The great ones write music that is so integral to what’s on the screen that you forget the music’s even there. The music reinforces your emotional response rather than interrupts it.

SY: I think we have a theme here. Your preference for Finale, your pencil-first workflow, and your notation approach are all driven by your desire to not place any barriers between people and music.

RP: Exactly. My philosophy is to remove any unnecessary obstacles.

In our next post we’ll conclude our interview with Robert, see an example of his excellent Finale work, and learn more about his music and his award-winning CD, The Book of Goddesses.