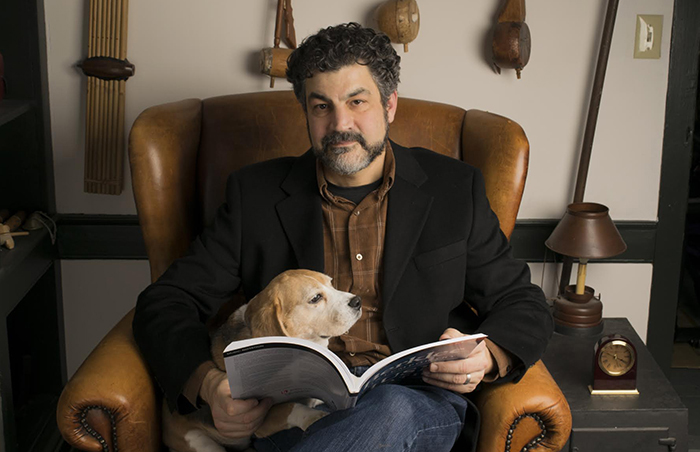 Jonathan Feist is no stranger to the Finale blog. He’s been a guest author and was featured in this previous post. By day Jonathan is the editor in chief of Berklee Press and a Berklee Online educator. He is also the author of Berklee Contemporary Music Notation.

First is Jonathan’s writing. Apparently, he never received the memo decreeing that notation books must be stuffy resources and not enjoyable reads. Second is Jonathan’s commitment to “diversity in notation,” where he recognizes that there can often be more than one acceptable way to notate things.

Jonathan is as easy going to speak with as he is understanding of folks who want to notate things differently.

What inspired you to write a book on notation?

This book was written to address a specific need at Berklee, which was that the Professional Writing Division needed a resource about notation that was a bit more oriented towards contemporary music and a diversity of styles than what was currently out there. They wanted something that thoroughly covered the basic symbology and best current practices of writing music, and then also addressed things like drum set charts, guitar chord diagrams, measure repeat symbols, film scoring customs, large score/part layout, choral music, and so on.

Originally, I was asked to create an online course about it, and I started by expanding the scope of my Finale course, which I’ve been teaching since 2002. When I did that, there seemed to be an awful lot of text on the screen that would more effectively be presented in a book. So, I filtered out that stuff from the course and created the book out of it, after expanding it a bit to become a more comprehensive resource.

Were any classic notation texts particularly influential to you?

Yes, many. I’m a book hoarder. Gardner Read’s classic text has been a career-long companion. Berklee Press also has two books that I’ve used a lot as references over the years: Music Notation: Preparing Scores and Parts (Nicholl/Gruzinski), and Music Notation (McGrain). I have several others, too, but I don’t use them as much.

In the afterword, you tell a story about asking a colleague for the standard Berklee approach to a certain type of notation. Can you share that experience?

Oh, thanks, that’s the story that I introduce by saying I should probably not actually ever tell it, and here we are, telling it again…. But if this is going to be a tell-all piece for your gossip rag, so be it.

So, when a notation question comes up at Berklee Press, and there’s a need to come up with a “house style” way of rendering something, I have a process that I follow that I hope will lead us to the best answer. First, I try to find many examples from the literature, preferably published by a half dozen or so respectable publishing houses, and I see if there’s a clear majority way of presenting it. If it’s not clear, I ask several high-up administrators (usually division deans, department chairs, and old, grizzled professors) and other smart people at Berklee what their thoughts are. Finally, I reach out to colleagues and friends of mine outside of Berklee, working in the field, often far flung around the world, to see what they recommend. Hopefully, I arrive at a clear sense of best practice for that technique.

On one occasion, a question came up regarding how to notate a … Let’s say, it was an alphorn part, to protect the innocent. I learned to do it one way, the author sorta, kinda thought it should be done another, but wasn’t really sure. Fair enough, let’s see what the larger opinion of this issue was. So, I went to the chair of Berklee’s Alphorn Department (we don’t really have an Alphorn Department), and asked her how she’d notate that technique.

She scratched her chin, and then went to her bookshelf, and found a book about alphorn technique, consulted how that book rendered it, and then presented that page to me as what should be our definitive standard.

What she didn’t know was that I was actually the editor of that book—practically, its ghostwriter. And she was using my own writing to convince me of her own expertise.

In that moment, I lost a lot of faith I had in the authority of the printed page, because I knew how that sausage got made. I am not an alphornist, and I shouldn’t be the one dictating the definitive way to notate its techniques! Fortunately, I’m pretty meticulous about this kind of thing, and in that case, it was an appropriate and thoughtfully considered choice. But the point is, when something is published, it has a sense of authority about it.

It’s something we all need to be careful of—particularly today, when anybody can be a publisher.

Despite embracing notational diversity, you’re not wild about handwritten fonts.

Kidding, kidding. Handwritten fonts are not terrible. I just think that they are not as easily readable as engraving-style fonts.

In every class, I give my students an A/B survey of an example in a handwritten vs. an engraved notation font, and ask them which one they think is easier to read. Every time (and I’ve done this with dozens of classes, and nearly a thousand students), almost everyone expresses a strong preference for the engraved font version.

About one out of fifteen students prefer the opposite. I try to make sure that the holder of this minority opinion feels like a valid and valued member of our community, despite being a misguided, stubborn freak.

Were there notation decisions you struggled over in the creation of the book?

One of the topics I really wanted to include was how to notate fiddle chop notation, which is coming up more and more frequently in our publications. “Chop” style is a percussive, groove-oriented fiddle playing technique, and everyone should check out the YouTube videos of Casey Driessen for some amazing examples of what a fiddle can do, in the hands of a mad genius.

There are various competing ways that people notate chop techniques, even at Berklee. Some really smart, talented members of our string faculty had been mulling this over for quite a while, working towards settling on a standard. I will admit to pushing them to clarify their thoughts about this before they might have preferred, so that I could include that information in my book. But they were really good sports, and very kind to each other during the rather fraught and highly technical conversations we had about it. It was a difficult but healthy process, and I appreciate their efforts so much. Looking at you, Casey Driessen, David Wallace, Oriol Saña, Darol Anger, Mimi Rabson, Mike Block, and several others.

You know, I want to say that it’s a hard question, because there are so many, but in fact, something very quickly jumps to mind: that you can apply an articulation to a series of notes by simply holding down its metatool and dragging the mouse. So, if you want a few measures of sixteenth notes to all be staccato, choose the Articulation tool, hold down S, drag over the notes, and voila! I love that so much!

I also adore the Edit Filter. That one’s a very deep, long-felt affection, particularly for how it lets us copy/paste just chord symbols around a score. My students practically shed tears of joy, when I show them that one.

My favorite? Many years ago, I had an older student take my online Finale course. He was in his sixties and recently disabled, having had to give up his long and distinguished career—if memory serves—as a performing pianist and a high school music director. Mostly, he took my course because there wasn’t much else he could do as a result of his back injury, and so the course was a way to occupy his time while he was recuperating. But he fell in love with Finale and the engraving process, and a year after my course, he wrote to tell me that he had embarked on a new chapter of his life and career: as a notation engraver. I felt useful, that afternoon.

It was a reminder to me about one of my favorite aspects of music: there are just so many ways to reinvent yourself in it. You can get tired of one dimension of music and leave, but then come back to it in a new way.

Music is always there, waiting.

In a fine interview at online.berklee.edu you mentioned how notation software has influenced notation. Can you share an example?

Yes, in so many ways. Particularly, though, I think that informal, non-published notation is a lot clearer now. One example is that measure numbers at the beginning of systems are ubiquitous, because they are the default. Decades ago, handwritten charts often didn’t have them, because writing them was a chore. This is a good change. Measure numbers are helpful.

There are certain other practices that are more neutral, in terms of benefit. For example, there was a handwriting convention of leaving clefs off the systems of single-instrument parts, after the first system. That’s fading a bit. You still see it, and some writers prefer it,  but it’s an unnecessary shortcut to leave those out. The same with the old shortcut of leaving off begin-repeat symbols from the first bar. The handy “Simple Repeats” shortcut in the contextual menu makes those so easy, why bother to leave them out? It’s clearer to leave them in.

Because notation software is so easy and so commonplace, there’s a higher expectation now that charts be readable. A couple decades ago, it was “hip” to handwrite charts, to fly in the face of those computer composer people, but that’s faded. Performers and students just want legible notation, and software is the easiest way to get that.

As you point out, despite your caveats about diversity in notation, you probably still have had some interesting reactions from readers. What’s the most entertaining feedback you’ve received so far?

You know, I thought I was going to get a lot of hate mail as a result of this book, but in fact, the feedback has only been positive. To me, what’s been “entertaining” is when people I consider to be much smarter and more experienced than I am tell me that they learned something from it. Lalo Schifrin, whose bootlaces I am not fit to tie, said that he found it “enlightening.” And my childhood hero, Peter Schickele, actually read it and gave me a fun quote for the back cover. So, I’m sure that the hate mail will find me, eventually, but I am grateful to have stockpiled a few supportive antidotes to comfort me, when it does.

I can’t remember the last time an answer to a Finale blog interview question made me laugh out loud. Thanks to Jonathan for the great resource and the fun.