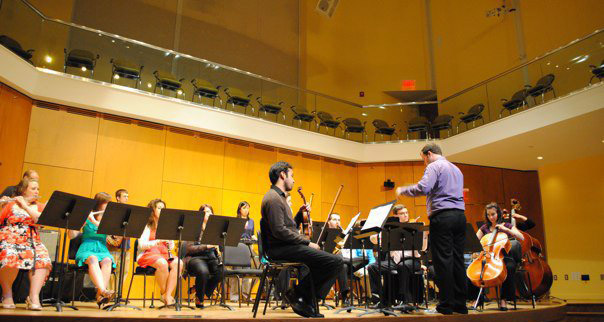 Composer/pianist Chris Opperman is best known for his work orchestrating the music of guitar heroes Steve Vai and Mike Keneally for their respective performances with Holland’s Metropole Orkest. He has recorded with Vai as a pianist as well, including a performance on “Lotus Feet,” a 2006 Grammy Award nominee for Best Rock Instrumental Performance. Chris has also been recognized as a composer, having been awarded several ASCAPlus Awards, and has recently released his fifth solo record titled “The Lionheart.”

Scott Yoho: Your website indicates that you were “first inspired to become a composer by hearing the music of Frank Zappa,” and today you’ve worked with Mike Keneally and Steve Vai, who both played guitar with Zappa. Can you talk about your first introduction to Zappa’s music?

Chris Opperman: My high school trumpet teacher, Charlie Guzzo, had a poster on his wall for Zappa’s Universe and I thought Frank looked like a brilliant mad scientist. Charlie raved about Frank’s music, inspiring me to buy my first Zappa album (the “Zappa’s Universe” tribute concert), which prominently featured Mike Keneally.

After that, I was completely obsessed and spent my high school years collecting every Frank Zappa CD. When friends would hang out in my basement, it was understood that we would all be listening to Zappa.

Sometimes I’d let my friends play the Beatles…but only if I was at their house!

SY: How did you first meet Mike Keneally?

CO: I stumbled upon Mike’s website when I was a high school senior and we started an e-mail correspondence. He would send me insane homework assignments, like learning the hard version of “The Black Page.” I spent days just trying to play the nested tuplets correctly.

SY: How did your involvement in “The Universe Will Provide” come about?

CO: I had worked on charts for a few of Mike’s projects including his “Dancing” album (on which I played trumpet and a little bit of piano) and a live performance he did of his “Nonkertompf” album in Holland. Since that project was successful, Mike was offered the opportunity to compose a piece for the Metropole Orkest and hired me to help him with the project.

SY: Can you tell me about your work process in that project?

CO: I had an unprecedented amount of freedom with that project as I was promoted from copyist drone to orchestrator. Mike composed all of the pieces but we worked on all the orchestrations together. Mike would come over to my apartment and we’d do orchestration sessions until three or four in the morning, giving me a chance to get 2-3 hours sleep before my day job at Universal Music Publishing Group.

In addition to the stuff Mike was composing, I would sometimes raid his notebook and just start orchestrating stuff out of it. Sometimes he would ask me to do random things like “Give me Gil Evans here,” or “Pick a motif from somewhere and make a cool chord progression out of it for me to solo over.”

We basically tried every single little thing either of us thought of.

The “Worrywart” section of “Worrywart Spoonguy” was something Mike wrote while he was supervising my orchestration of “Spoonguy.” I thought he was drawing but he was composing another piece. I was in total awe because I can’t listen to one piece of music while reading a completely different piece.

Mostly what I remember about that time of my life was how totally happy it was. Personally, I don’t think I’ve ever been more productive musically and it was very hard work but a total and complete dream come true. I was on the moon the entire time.

Next week we’ll conclude our interview with Chris with details on his work with Steve Vai as well as his solo projects. Ask a question or let us know what you think by clicking on “Comments” below.