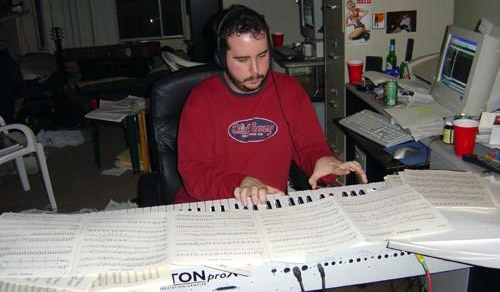 SY: How did you meet Steve Vai?

CO: The first time I met Steve Vai was when Keneally was on tour with him in ’96. My first rock concert was the first G3 tour and I got to go backstage and everything. SO COOL! I met Steve a few times after that, but he would never remember who I was until I reminded him. But after my “Klavierstucke” CD came out in 2001, Steve became a big fan, which alone was worth all the effort of making that album!

SY: How did you come to orchestrate some of Vai’s work for the Metropole Orkest?

CO: Unbeknownst to me, Steve had been looking for a project for us to work on together, and he thought I did such incredible work on Keneally’s “The Universe Will Provide” that he hired me to work on his orchestral project. Mike Keneally and Co de Kloet (commissioning editor of Dutch public radio) also highly recommended me.

CO: When we were in Holland, I actually asked him why he picked me over everyone else in the world and he said it was because I know instinctually what it means to be both a classical composer and a rock musician, since I come from both worlds.

SY: Can you tell me about your work process in that project?

CO: That project was much different and much more complicated than Mike’s project. There were several other orchestrators and we all worked on our own projects. In addition to my orchestration duties I had to supervise what everyone else was doing (besides Steve, obviously, he was the boss!), so I was completely overwhelmed. We all were. I had status update spreadsheets and everything.

One of the pieces, “Bledsoe Bluvd,” proved to be the single most difficult piece I’ve ever had to notate. It had multiple simultaneous non-standard key signatures and more notes per square inch than the population density of China. It was the bane of my existence for a while, but finally getting to hear it is a dream come true and it is, and always will be, one of my absolute most favorite Vai pieces.

SY: What was your first introduction to Finale?

CO: I can’t remember the version number, but it was whatever was current in 1994. My choir director Miss Novak would sometimes sign me out of gym class and let me play on Finale. I remember orchestrating a march called “Follow Me, Boys!” for band director Mr. Morgan’s Boy Scout troop. That was the first time I stayed up all night working on a music project.

SY: Got any Finale tips?

CO: When I started working on Mike Keneally’s project, I started dating all my file names as we worked on so many different versions, and this convention has served me well over the years.  I name them like this: ¬Title 110615 (The title, then the year, the month, and the day). This ensures the various versions of each score appear in chronological order.

Also, if you’re writing piano or pitched percussion music, your true best friend can be found at Plugins>TG Tools>Cross Staff.

SY: You recently released “The Lionheart,” your fifth solo CD (which includes performances by Mike Keneally and Finale Blog alumni Frank Macchia). What were your goals or vision for this project?

CO: After finishing Steve Vai and Mike Keneally’s orchestral projects, I felt that my best work was music I helped other artists create so I wanted to make an album that was a true statement of myself as an artist.

While most of the tracks on “The Lionheart” were pieces we had been performing live for years, the arrangements really came alive in the studio.  That effort was dwarfed , however, by the task of assembling “The Porpentine” (the twelve part opus that concludes the disc).  I was determined to compose a big orchestral piece and have it all performed by real instruments rather than synths and samples.

Once I completed the score, my friend Steven Leavitt converted all the MIDI files from Finale into Gigasamples, so we had a high-end film studio version of the piece.  Then, over the next year, we overdubbed all the real instruments one at a time (whenever I had the money and musicians available). The benefit of doing it this way was that engineer Neil Citron and I had complete maniacal control over the hundreds of tracks in the mix.  I’m very proud of how the album turned out and it wouldn’t have been possible if it wasn’t for the inspiration, encouragement, and support of everyone involved.

SY:  How do you describe this music to others?

CO: Usually I tell people it’s an eclectic blend of rock, jazz, and classical music, but that doesn’t truly describe “The Lionheart” because there are also elements of bluegrass and folk music and other elements that are specific to it.

Usually, though, I find that I am motivated to compose by love.  If I’m writing it’s because I LOVE something, be it a story, or a feeling, or just a passing comment that I friend made to me and I’m excited about sharing those feelings with others.

I’d like to thank Chris for sharing his experiences with us as well. Let us know what you think, or what you’re up to, by clicking on “Comments” below.