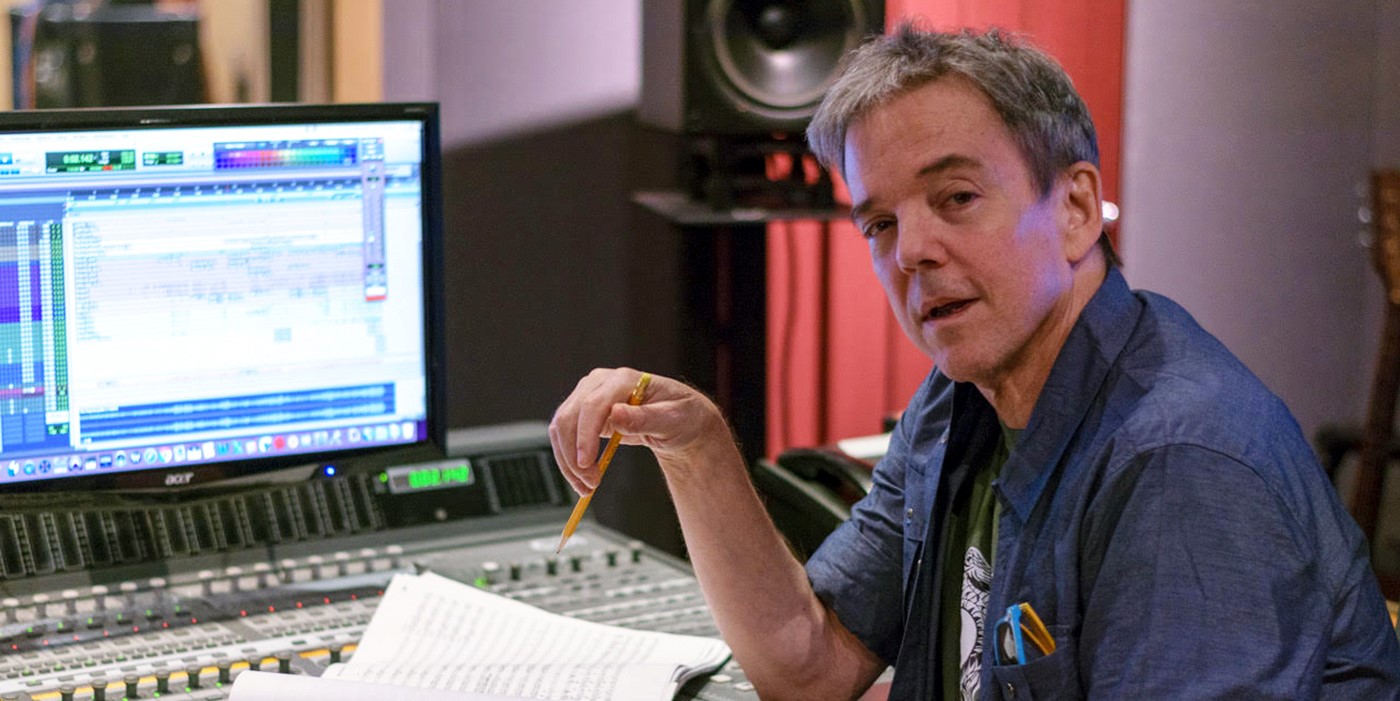 Creating a compelling performance with MIDI data in a DAW depends on the manipulation of Continuous Controller Data (“CC”) and MIDI Key Switches (“KS”) for dynamics and articulation. In Finale, this data is created automatically from score markings when Human Playback is turned on.

The conventional wisdom regarding Human Playback CC data has been to turn it off for export to a DAW. The disadvantage of this approach is that all this humanizing data is lost, and the score won’t sound like you wrote it. In order to replicate the advantages of Human Playback using a “clean” MIDI file in Logic, editors would need to spend hours editing CC data in their tracks, creating Mix Automation from scratch.

This approach automates the creation of a good performance of the MIDI data in Logic, saving a lot of editing during the production phase of the project.

The following video walks you through setting up the ARIA Player (included in all Garritan Libraries) in Logic Pro X. I hope the video will be helpful, not only to Finale users, but also to Garritan users in general.

The Process in Brief without the Video

Below, I’ve duplicated the high points of the video for those of you who prefer having a list.

1. Saving Your Banks in Finale

2. Getting Started In Logic Pro X

Open a Session. Logic prompts you to add a track before you can get in your session. 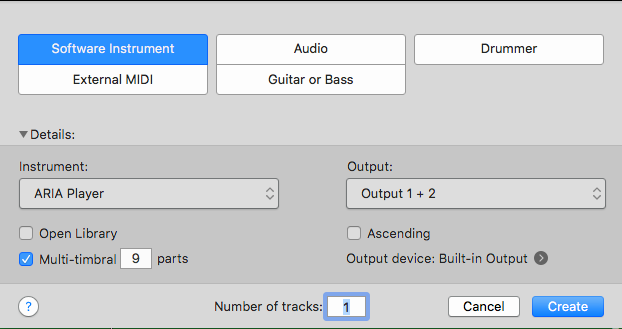 In the New Track dialog, select “Software Instrument,” then add the ARIA Player via the drop-down under “Instrument” 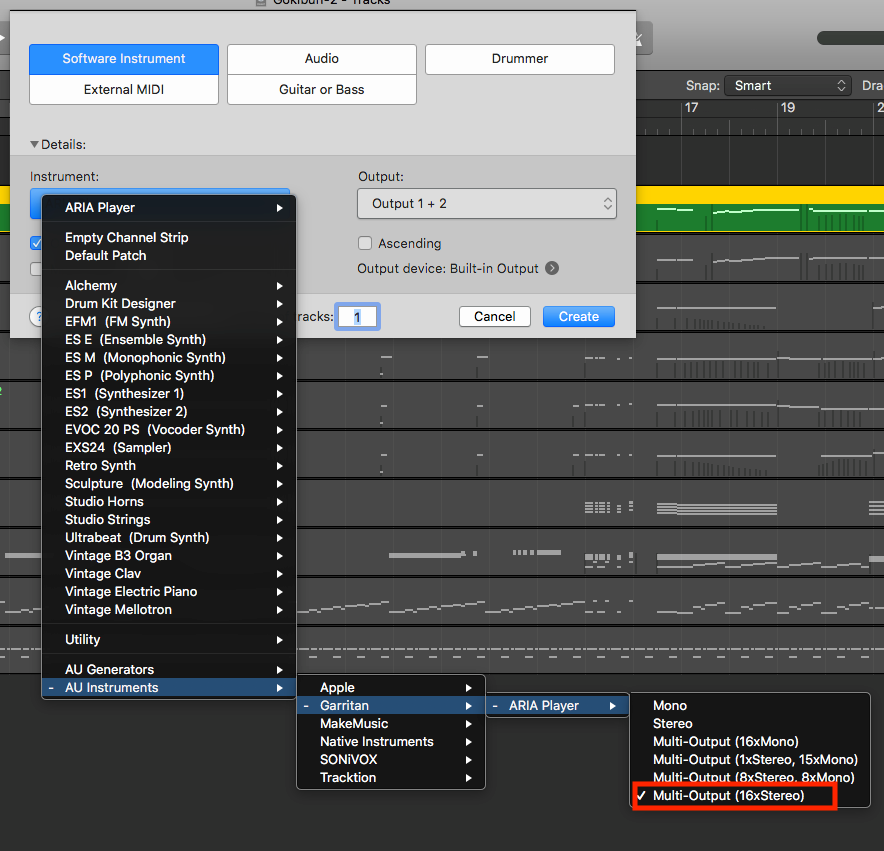 The Aria Player will open.

Next, load your saved Multi – and make sure your parts’ audio track routing channel assignments are distributed: 1&2, 3&4, 5&6, etc.

When using the ARIA Player as a multi in a DAW, in order to get full control over the mix, audio channel outs need to be reassigned from the default out 1&2 main stereo output. 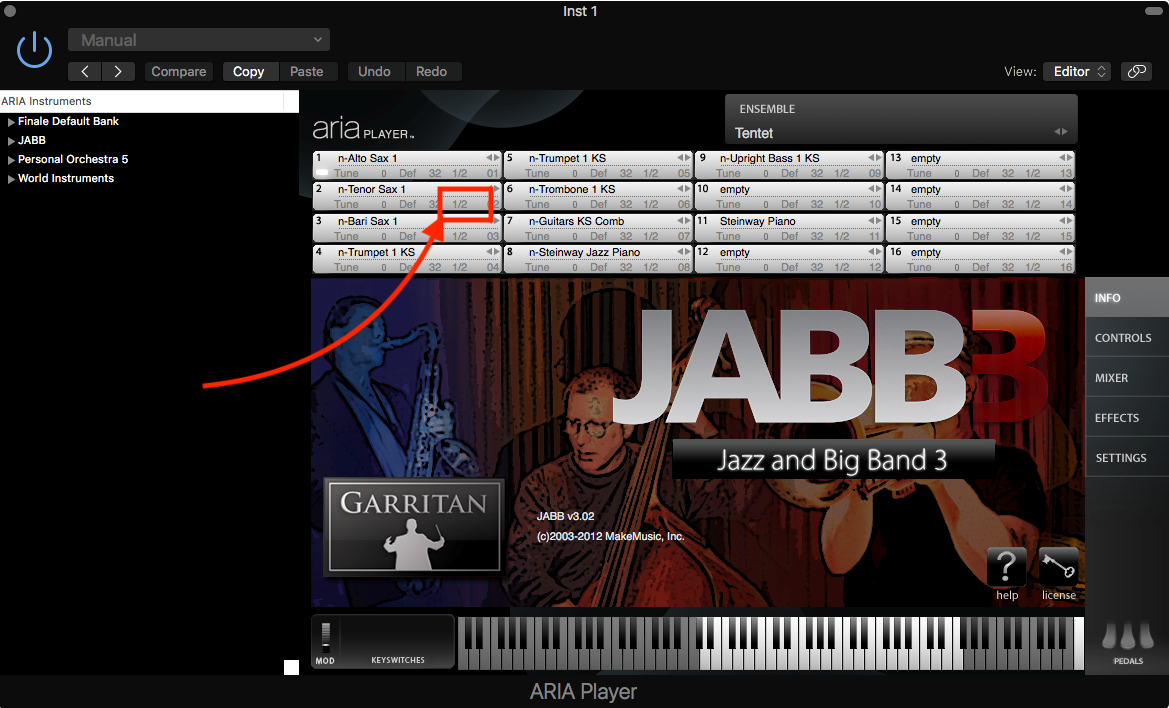 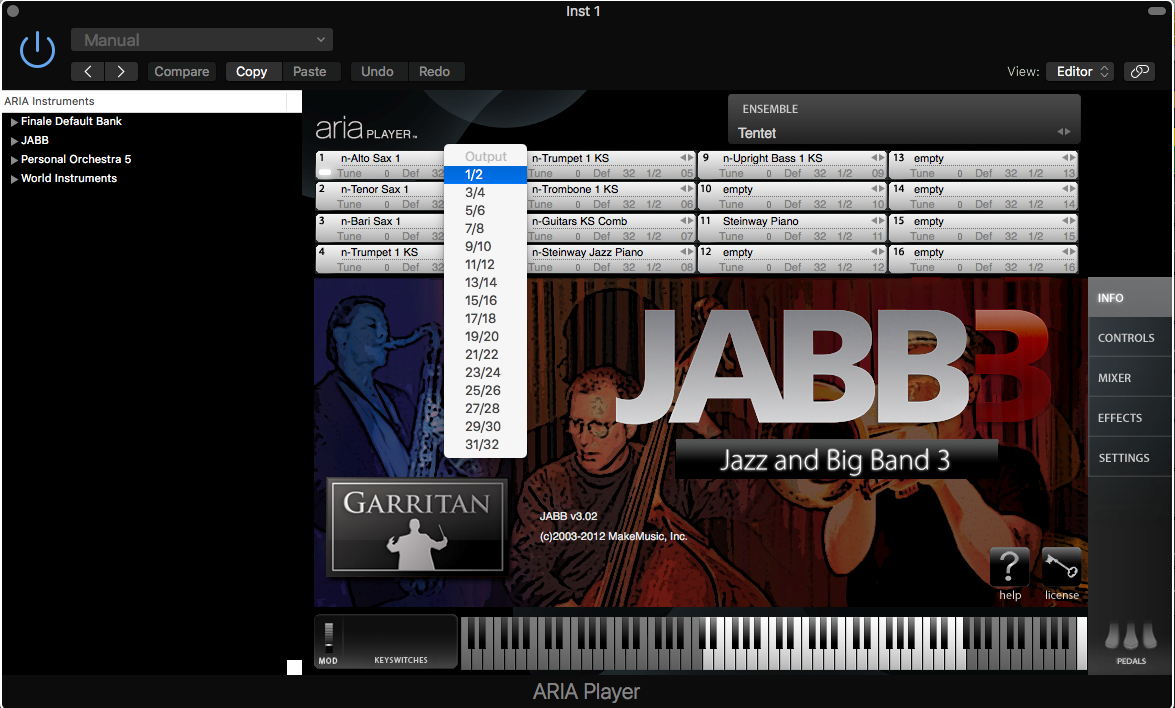 The first track you see in the Arrange view is the “master instance,” an instrument track hosting the player. You’ll see additional Aux tracks that will host your MIDI data. Name the tracks, corresponding to the parts in the multi you just loaded.

At this point, import your MIDI. It will load into a series of new instrument tracks in the Arrange window. Select all your MIDI tracks and drag them up to the Auxes. After doing that, delete all the instrument tracks created during MIDI import.

Now you have a separate Aux track containing your MIDI data for each MIDI channel, with your MIDI track data routed to its corresponding channel on the ARIA player, and receiving audio from the ARIA Player on a discrete audio pair. This takes care of MIDI–out, Audio–in for your MIDI tracks.

At this point, you’ll be able to bounce each part to an audio track, and go on mixing from there. But if you want to be able to edit or add to your MIDI once it’s in Logic (with full mix control before you bounce any audio), there’s more to be done.

After importing your midi, you can see what Human Playback adds to the file. Aside from writing MIDI volume and pan information, it also writes automation in seven CC Automation Lanes, plus Key Switches to change samples for articulation changes. 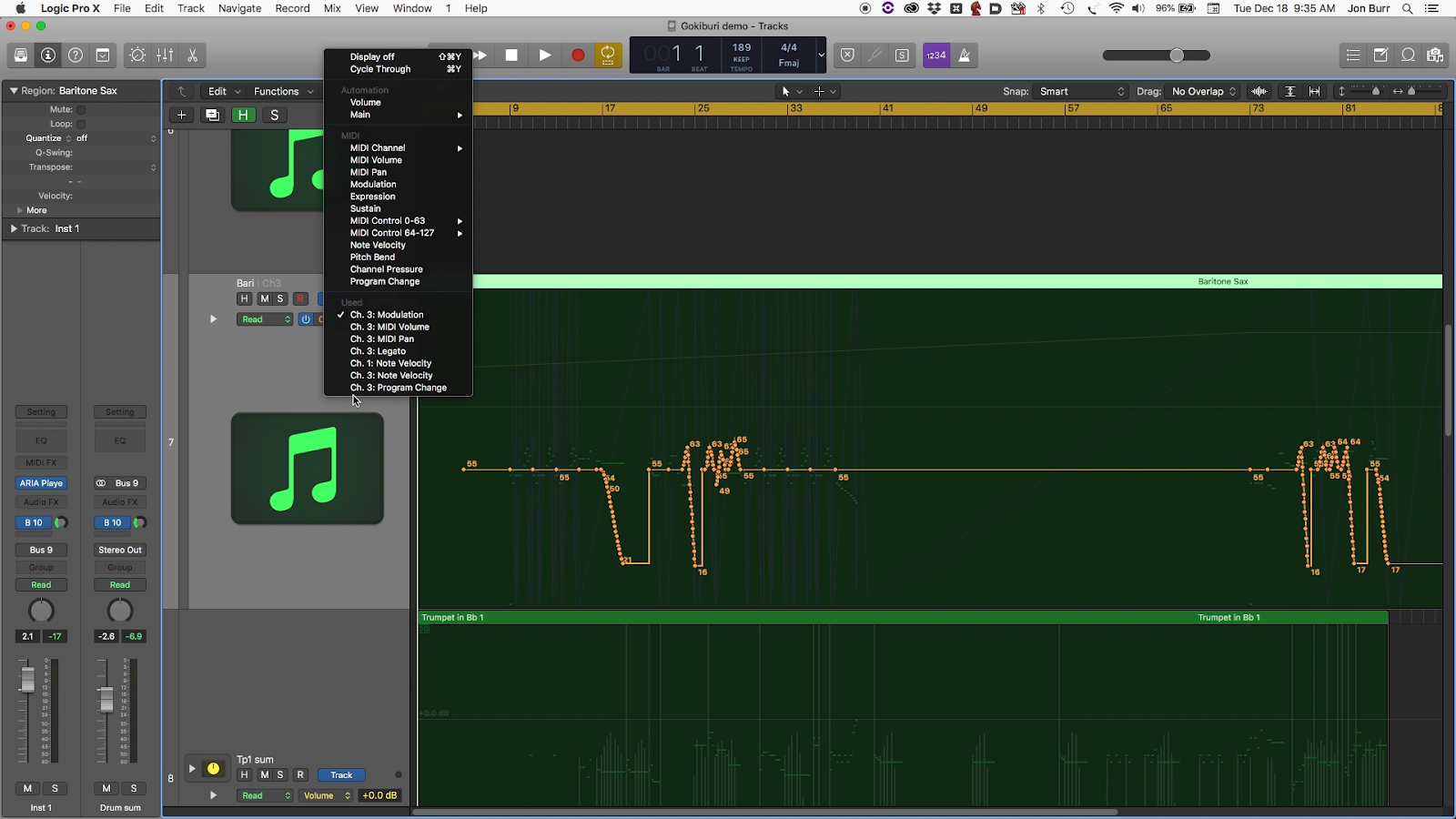 You may have noticed that the track solo buttons currently kill playback. It appears at first you can’t solo a track (unless you already know about the Region Solo and Mute functions in Logic Pro X). Why?

The answer is that track buttons work on audio only. Remember that all the audio for all these aux tracks is coming from the first (instrument) track only. We don’t need “Track Solo” – we need “Region Solo.”

There’s a toolbar icon for Region Solo (but not Region Mute). The easiest way to solo and mute at this stage of the game is to select the region and select “Control–s” (Solo) or “Control–m” (Mute). 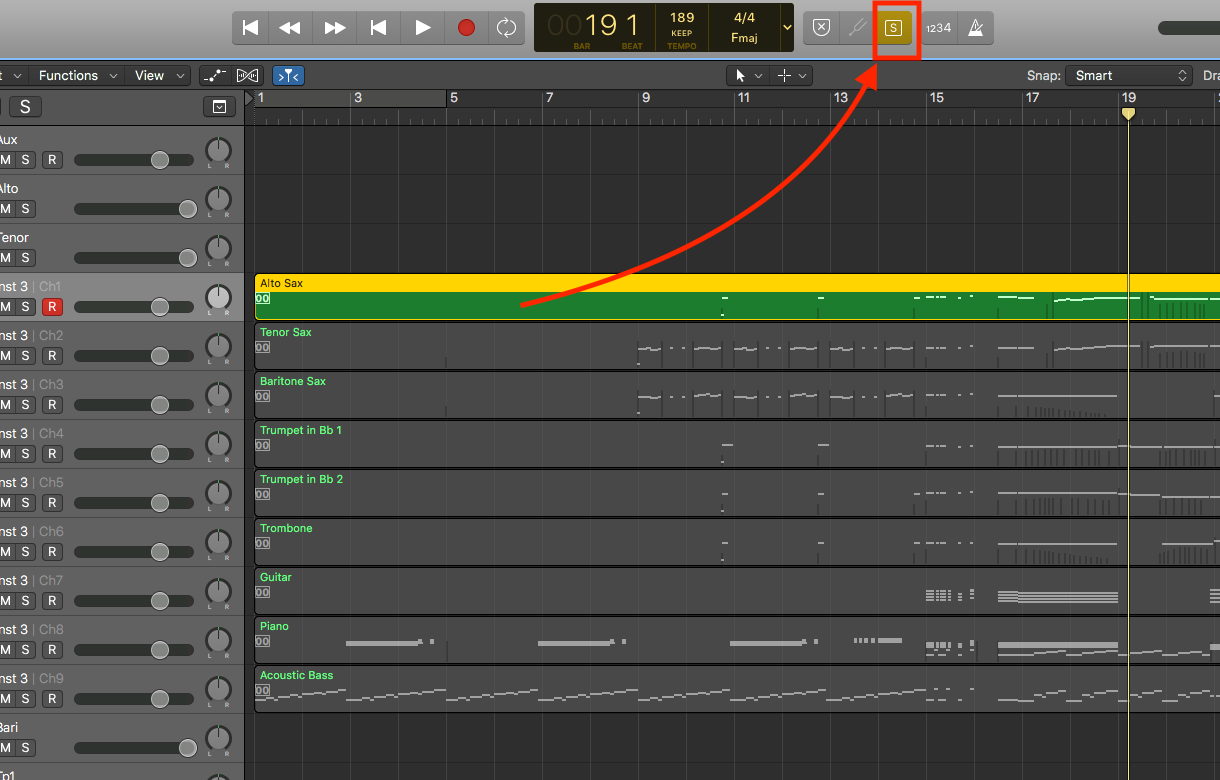 To render your Finale output as audio, Region–Solo a track, then right-click the region, and select “Bounce In Place.” If you’re going to use the MIDI again for another instrument, select “Leave” – and the other options as shown: 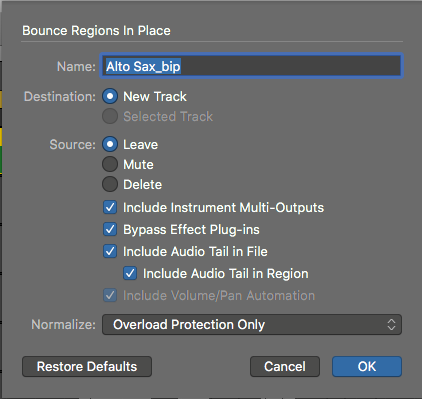 At this point, you might not have any effects on – which is good when you’re bouncing audio this early in a session. There is more to be done.

Now we need to create an additional set of Aux tracks to enable us to mix and process the audio for each track coming from the ARIA Player. Logic Pro X automates the creation of these aux pairs, and enables them to be joined in a Track Stack.

Next open your Mix window and create Channel Strips for the parts in the Multi by clicking “+” in the first instrument track. 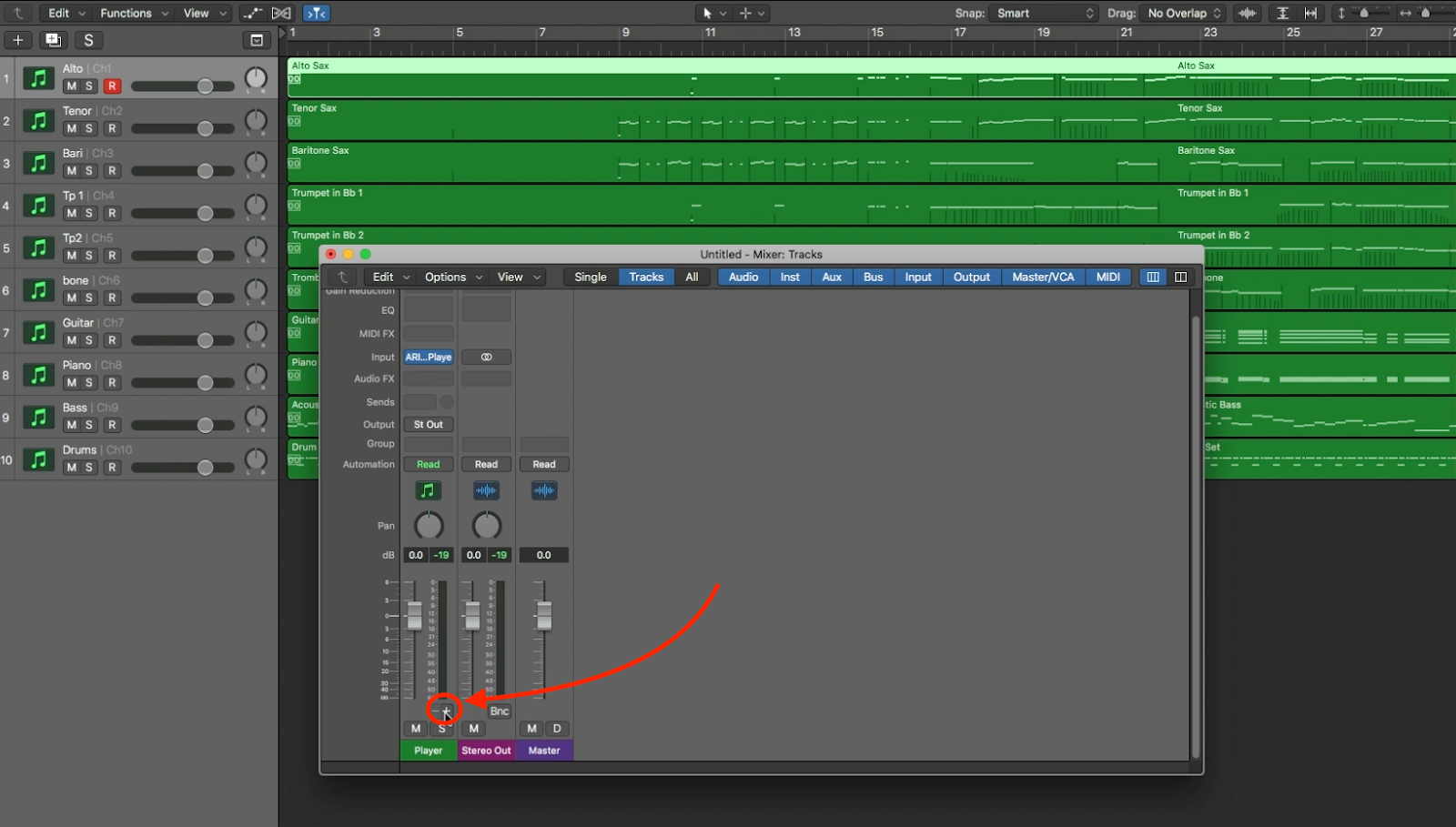 Continue until you have a Channel Strip for each Part,

Select all the strips you just created, then right-click to Create Tracks, which will show up in the Arrange window. Now you’ll have a pair of aux tracks for each part. 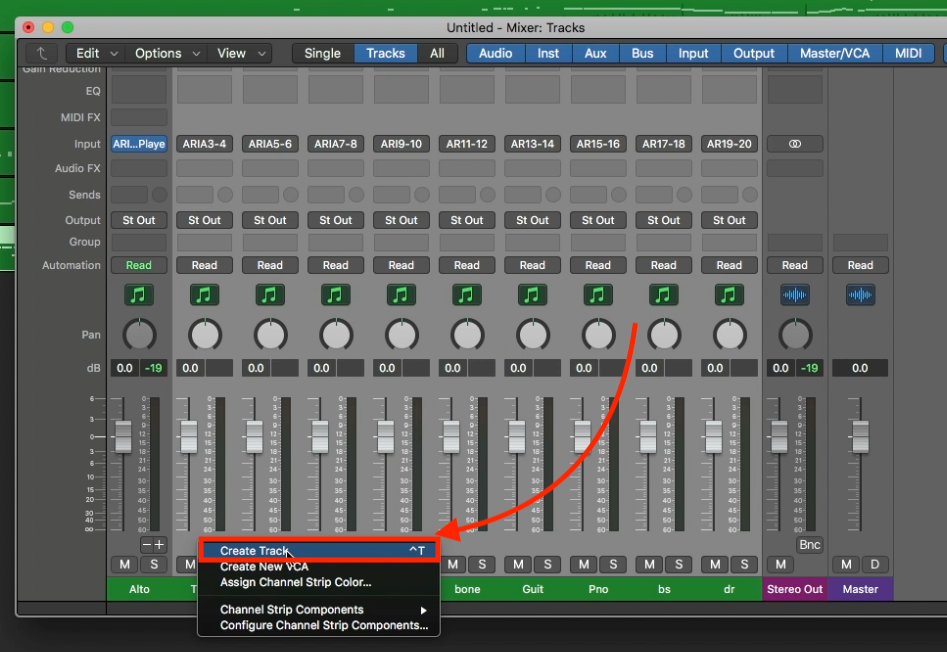 Finally, arrange your tracks so pairs are together. Select an instrument pair, right–click and select “Create Track Stack.” This step creates bus routing for the auxes – it’s essential for the signal flow to work. You’ll have 3 items visible in the Arrange window for each part: 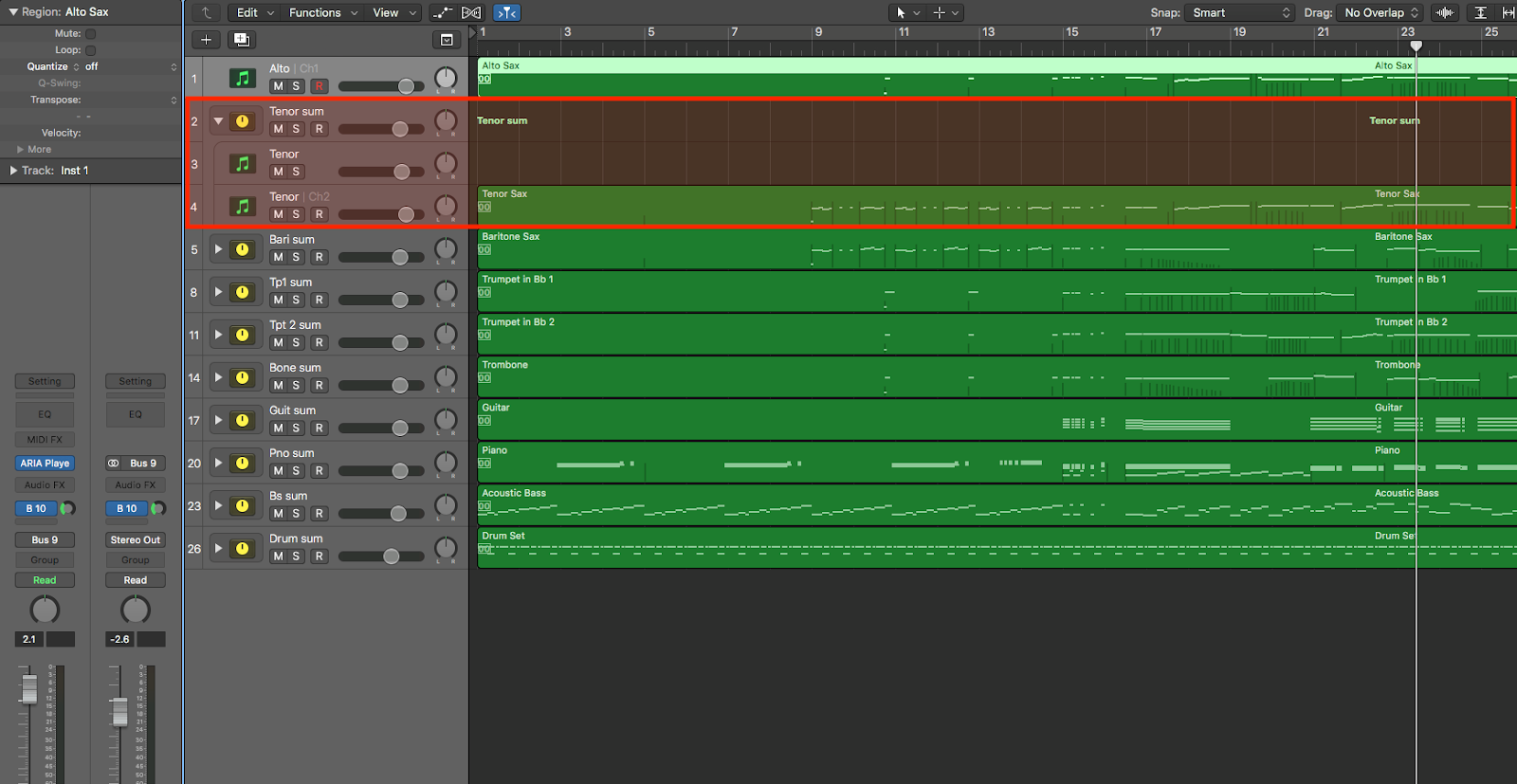 For mixing, selecting  “Single” view presents a set of controls that work for mixing in every track. 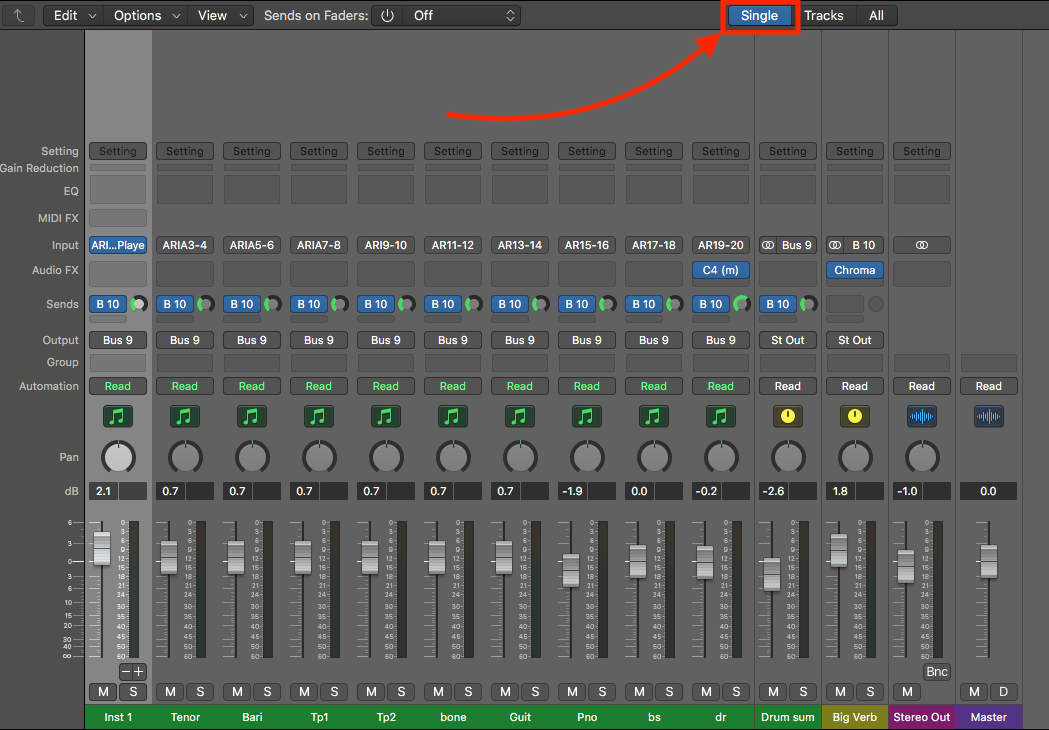 And that’s it. Now you’re ready for mixing.