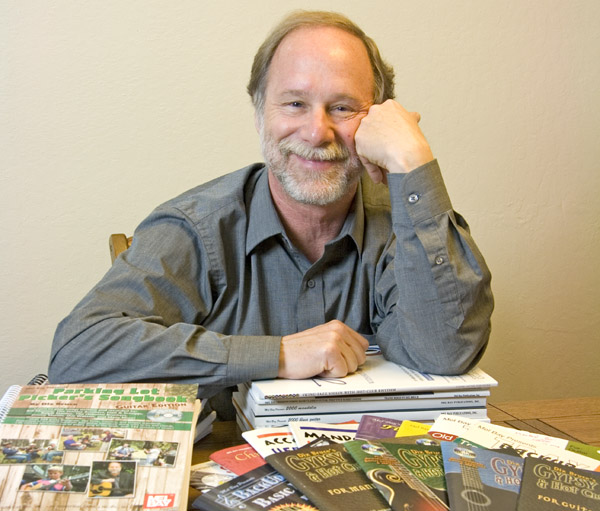 Dix Bruce is a Bay Area musician, composer, and writer with a rich background in folk, bluegrass, and jazz. In addition to being an award-winning guitarist, Dix is also an accomplished singer and performer on guitar, mandolin, and other stringed instruments. Active as both a live performer and studio musician, Dix has been described by Acoustic Musician magazine as a “…West Coast virtuoso.”

Dix has also written for a wide variety of music publications including Acoustic Guitar, FRETS, Bluegrass Unlimited, Flatpicking Guitar, and All Frets, the publication of the Fretted Instrument Guild of America. He writes regular columns for Flatpicking Guitar and Mandolin Magazine.

But it is as an author of instructional books that I first became aware of Dix. To date he has produced more than fifty music instruction books, CDs, and DVDs, mostly for Mel Bay Publications. And for more than fifteen years, Finale has been his notational instrument of choice.

In March 2010, Dix shared with me some of his experiences with Finale:

“I have used Finale exclusively to produce camera-ready copy for all of my publishers for at least the past fifteen years. I also use Finale to prepare the music and TAB for all of my columns and magazine articles. It’s “must-have” software for the things I do in music publishing both for its ease of use and its versatility: I can produce final hard copy, digital graphic files, MIDI files, audio files, and more. Whatever the editor needs.

Finale was indispensible in my latest and most extensive Mel Bay project, a series of six very large book/CD sets titled The Parking Lot Picker’s Songbooks. Each book (with separate editions for guitar, mandolin, banjo, fiddle, dobro, and coming soon, bass) is over 300 pages in length with more than 215 bluegrass, old time, and gospel songs. That’s a lot of music! Each piece of music includes standard notation, chords, lyrics, and tablature for the individual instrument.

I did have co-authors on three of the books but being responsible for that much music content was a daunting proposition! Finale made it easy.

I transcribed and arranged each song and then played it into Finale with a MIDI keyboard. Once in the computer, I added the other elements to make a master version of the song. Then these files were sent to my co-authors who did their own tweaking of the music and TAB and sent the files back to me for final layout. From Finale I generated either .EPS or high quality .PDF files and imported them into my page layout program.

Finale allows me to set up a smooth workflow from pencil and music paper to the highest quality digital graphic files so I can create these demanding projects with ease. That’s very important to me as most of my projects involve engraving and combining many separate pieces of music. I truly could not do the work I do without the help of Finale.

Of course I also use Finale for all the music and arrangements I play live, from single lead sheets to seven-piece band charts for concert, Bb, and Eb instruments. That’s the kind of versatility that makes Finale indispensible.

“Versatile” is an apt description of both Finale and Dix. I appreciate his time in providing a glimpse into his work, which highlights just some of the many things we can all aspire to accomplish with Finale.

Learn more about Dix and his music at his website: www.musixnow.com