For many people, it’s hard to imagine life without technology that none of us had just a few years ago. Personally I could get along without cell phones, lap tops, and compact discs while I’d sorely miss home video.

But life before Finale? That would be really tough. For some, here’s what that life looked like: 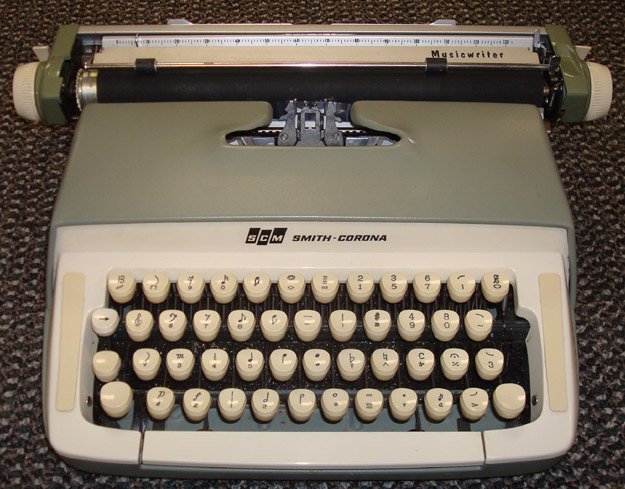 For decades, if you wanted to create your own, engraved-looking sheet music, the MusicWriter was your state-of-the-art option. Of course it didn’t play your music back, the slightest misstep required the use of correction fluid, and if you decided to insert a new measure in the first system, you started over. But the MusicWriter offered the promise of a page that looked better than my scribbling.

Here’s a close-up of the user interface:

According to the History of Music Printing website, the MusicWriter was invented by Cecil Effinger, a noted choral composer and music professor who created his first prototype in 1946. His company, Music Print Corporation, worked with various manufacturers (including Olympia and Smith Corona, the creators of this particular model) to produce more than 5,000 MusicWriters from 1956 to 1990.

The keyboard was used to put musical characters on any page. You could work on manuscript paper or use the MusicWriter to create even the staff lines. Unlike a typewriter, the MusicWriter carriage does not advance after striking a key: the user has to very carefully position the paper wherever they want to add any character. Many items, including slurs, ties, and beams had to be drawn by hand. Details of how music was created with the MusicWriter can be seen here.

While ingenious for its time, the MusicWriter didn’t handle transpositions, apply music spacing, or do any of the countless things we take for granted with software today — even in the $10 Finale NotePad. A Boulder History Museum webpage acknowledges this disparity: “Unfortunately, due to the advent of computers, MusicWriters quickly became obsolete.”

Some might debate whether it was the computer or specific software that was the leading cause of the MusicWriter’s departure. Personally, I lean towards the computer theory, if for no other reason than this: If software is the culprit, I’m a partner in crime, as no company has sold more music notation software than MakeMusic, my employer since 1993!

That said, I don’t feel particularly guilt-ridden about my role as potential accomplice. While I will occasionally spin an LP and appreciate the benefits it offers, I’ve yet to borrow coworker Mark Adler’s MusicWriter: Nostalgia doesn’t draw my beams for me – let alone provide me with linked parts.

PS: Click here to check out the next generation of music notation: the MusicWriter II!