Happy Halloween from MakeMusic! I recently created this file to share some Halloween fun with Finale. This traditional Halloween song can be sung as a round. After downloading the file here, press play to hear the round play back. For added fun in the classroom, delete the eyes and mouth before printing and let your students create their own pumpkin faces. 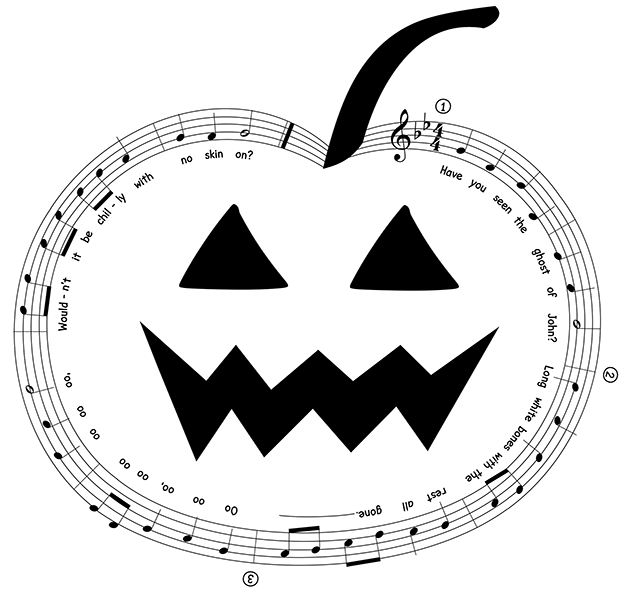 People often ask how I create files like this, assuming that I have imported graphics into the Finale file. This file contains no imported graphics or customized fonts; it was created entirely in Finale. To start, I create a playback staff and entered the round that the file would play back. I chose G minor because it places most of the notes within the staff. While having notes with ledger lines is really not a problem, it does add to the time it takes to tweak the finished file. Next, I hid all of the notes and staff lines in the playback staff.

I then created the pumpkin shaped staff lines using the shape designer. The eyes were entered as expressions made with triangle noteheads from the Broadway Copyist font. I considered using a mordant for the mouth, but was not too happy with the expression it produced, so I created a more friendly mouth using the shape designer. The pumpkin stem is actually an eighth note flag from the Jazz font. Most everything else on the page, all of the notes and lyrics, was entered as a custom Smart Shape. By using a Smart Shape, I was easily able to rotate each element to match the contour of the pumpkin.

You may have noticed that I am not listed as the arranger; F.M. Bunbury is one of the pen names I use. Kudos to any non-English Lit. majors that can figure out the significance of the name.

Don’t own Finale? You can still enjoy the file using our free software, Finale NotePad and/or the Finale SongBook iPad app!