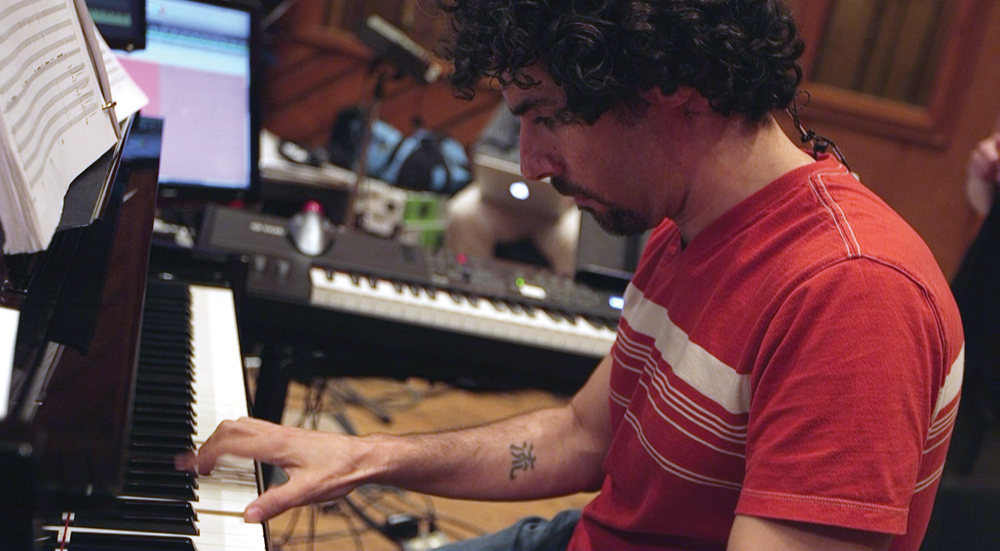 Hamilton is a cultural phenomenon. Lin-Manuel Miranda’s musical about founding father Alexander Hamilton has won 11 Tony Awards (including Best Musical and Best Orchestrations), a Pulitzer Prize, a Grammy for Best Musical Theater Album, and numerous other awards. At a time when so much of America is divided on multiple fronts, Hamilton is clearly not one of them: President Barack Obama joked that admiration for the musical is “the only thing Dick Cheney and I agree on.”

Alex Lacamoire is the musical director and orchestrator behind Hamilton, and has been from the start. In 2009 when Lin-Manuel offered the White House a glimpse of the show that was to come, Alex provided the spectacular piano accompaniment behind his performance.

With all of the excitement around the show I was surprised and delighted that Alex found the time to answer some questions for us about his work and workflow.

How did you first meet Lin-Manuel Miranda?

I was recommended to Lin by some mutual friends that I grew up with in Miami. They performed in an early reading of In the Heights and said to him: “You have to meet Alex; he’s a music director, he’s an arranger, he’s Cuban, he’s from Miami…I think you guys would hit it off.” Heights was our first project together and I’m fortunate that he kept calling me to join him on the others.

I loved the performance that you two did at the White House in 2009. Was that a pivotal moment in the development of the show? Do you have a White House story you can share?

It was amazing enough that we were invited to perform for President Obama and the First Lady, but we didn’t know that the event was going to be filmed so classily or that it was going to be so accessible on YouTube — that was a lovely surprise. I think it got people excited about the piece and started to show us that the idea had an impact on audiences.

A fond memory of the day was the minute I spent chatting privately with President Obama, telling him how happy I was that he had just loosened the laws that permitted us Cuban-Americans to travel more freely to Cuba. He said, “Let’s see if we can’t make some progress down there,” and I replied, “With you at the helm, sir, I have no doubt we will.” He kept his promise — there is now an American Embassy open in Havana.

How did you and Lin-Manuel work together on Hamilton? What is your workflow, and when does Finale enter the process?

Lin composes mostly into Logic. Since he doesn’t notate music, he hands off his demos to me or my assistants so that they can get transcribed into a piano/vocal chart using Finale. As I edit the music, I customize the piano part and organically improvise some arrangement ideas that become part of the song, such as vocal harmonies, rhythmic breaks, endings, etc. Lin will give me feedback after I present my edits to him.

Sometimes we’ll work side-by-side on a moment, but mostly he’ll hear the big picture at a vocal or band rehearsal after everything’s been taught and then give his notes. We’ve worked together so much that I feel like I know what he wants, and he trusts me enough to let me do my thing and add my own voice to his music. When it comes time to orchestrate, I input directly into Finale. The Hal Leonard Vocal Selections for Hamilton were also done on Finale, drawing from the files that my team and I created for cast rehearsals.

Can you share a specific hurdle or significant challenge you encountered in orchestrating Hamilton?

The trickiest part of orchestrating a show like Hamilton is finding the balance between the electronic and the acoustic, between the live instruments and the loops. Fortunately, I had just worked with Lin on Bring it On, which had a similar challenge. With that show, I had some misfires where I oversaturated the orchestrations with too many keyboards and pre-recorded tracks, thereby obliterating the vocals and drawing attention to the charts — I basically learned what NOT to do. If it hadn’t been for Bring it On, I would have been much more lost on how to orchestrate Hamilton; I got to establish a vocabulary that allowed me to know where I was going.

Do you have a favorite memory from the creation of the cast recording and working with the Roots?

The whole process is my favorite memory! Some highlights include: seeing how well my band plays in a studio context; being given the time to record each element individually until we got it right; seeing the cast CRUSH their vocal performances; playing REO Speedwagon with Questlove on some down-time; and hearing the finished album with the cast at a listening party at Atlantic Records. Every phase went so smoothly, and it was the best experience I’ve ever had making a record.

What was your role in creating the sheet music?

I get the distinct honor of having a strong say in how Lin’s music gets visually presented to the world. I’ve been transcribing since I was 9 years old, and I have always obsessed over the details of how sheet music is “supposed” to be notated. That makes me a meticulous caretaker of Lin’s work, and I take great pride in being in charge of that.

If it weren’t for Finale, I wouldn’t have the means to make my edits so quickly or to make the charts so easily accessible to the actors and the band. An author needs some kind of word processing software to notate their ideas and broadcast them; as a musician, I use Finale to make the music transmittable to others.

Were you introduced to Finale at Berklee?

I first heard of Finale as I was graduating high school in the early nineties. Finale was accessible to us in the computer labs at Berklee when I got there in 1993, so that’s where I became comfortable using the software. When I bought my first home computer in 1995, Finale was one of my first purchases, and I have never stopped using it.

I love that Finale gives you the ability to adjust any facet of your music, whether it be spacing, measurements, fonts, etc. On Broadway it’s still the most popular notation software, and I get to be part of the “club” that trades insider-tips. While I know that it’s not the easiest application to learn, it’s certainly the most powerful that I’ve seen. The one thing I would change is the bugs that pop up from update-to-update. When you upgrade, there’s always some little quirk that appears that wasn’t there before, and that’s frustrating.

My favorite tips that most people don’t seem to know about (passed on to me by my buddies Ryan Shore and Michael Starobin):

— In Page View, after selecting a measure (via Measure tool, or Selection tool, etc), you can use the up or down arrow keys to move that measure to an adjoining system.

— In Speedy Entry: Say you want to change the notes of a chord you’ve already notated. Instead of deleting and re-inputting, move the crosshair onto the chord you want to change, play the new chord on your MIDI keyboard and hit Enter (this only works with the Enter key, not Return).

— Select the handle of an expression you’ve already assigned to a staff. While holding the Option key (Ctrl on Windows), hit arrow up/down to copy that expression to an adjoining staff. (Great for dynamics in a large score.)

— The Selection Tool has some great macros assigned to it by default. After selecting some music: Press 6 to transpose it down a step, 7 for up a step, 8 for down an octave, and 9 for up an octave. 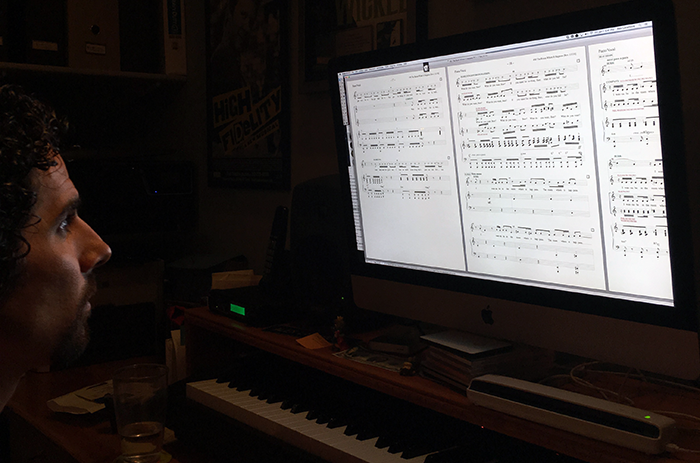 What are you working on now?

I’m about to go into rehearsals for the next company of Hamilton, which will open in Chicago on October 19. Between now and then, I’ll be working with my brilliant copyist Emily Grishman and her team to update all of the charts in Finale to include the changes that were made to the show in the preview process last year.

After that, I’ll be focusing on my next Broadway show, Dear Evan Hansen, which opens on December 4. For that piece, I’m the music supervisor and orchestrator, so I will once again be relying on Finale to make everything happen.

Thanks again to Alex for making time for the Finale blog and especially for the spectacular music.