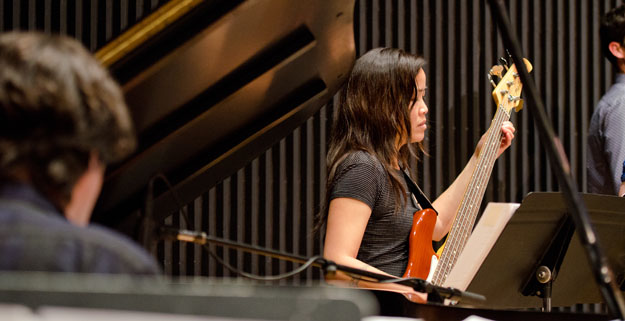 In February we announced the three finalists in the 2012 Finale National Composition Contest: Taylor Brook, Michelle Lou, and Nathan Shields. All three have subsequently written pieces for the JACK Quartet that will be workshopped and performed in New York City on Friday, September 14, 2012.

This week we’ll meet bassist/composer Michelle Lou, a student at Stanford University. I recently spoke with Michelle about her background and creative process.

Michelle Lou: No, my first instrument was guitar. I started playing guitar when I was 12. I just wanted to be in rock bands in high school, but no one ever seemed to want to play bass, so I started playing electric bass. Once I could afford to get a double bass, I got one and began playing jazz… and I later became classically trained at a later age than most.

SY: When did you first discover that you were a composer?

ML: Sometimes I still don’t think of myself as a composer, I guess. I started in undergrad as a bass performance major. I signed up for a composition class thinking that it was actually more like theoretical stuff. I showed up and they’re like, “compose something!”. . . right from day one. So I really never had an intention of becoming a composer, it just sort of happened.  The environment and teachers at UC San Diego were very supportive and I was hooked.

SY: Were there composers that you found particularly influential early on?

ML: At the time I was listening a lot to Morton Feldman and Stockhausen… Well, actually, it’s not just one single composer that I like. I find pieces from almost everyone that I appreciate. I also find that I don’t listen to as much music as I should nowadays.

SY: Just for lack of time?

ML: For lack of time…I do listen, but not so much for “pleasure.”  When I’m rehearsing I study the music I’m playing and when I’m composing I try to kind of keep my ears clear of other music…avoiding those dreadful earworms.

SY: Where does notation come into play? Do you use notation software today?

ML: No, I don’t. That’s the thing. I’ve taken some Finale seminars and I have Sibelius, but because of time or habit I’ve just not felt like I’ve had an opportunity to notate my music in software. It seems old-fashioned, but I just still do it by hand.

SY: So notation software has some appeal, it’s just a leap that you haven’t made, or do you think it’s more that you prefer the aesthetic aspects of paper and pen?

ML: I used to think — and I’m not sure anymore –  that it just felt like I was more tactilely involved when creating the music. And I have all these layers of working where I sketch it out by hand on paper, which would never change.  I also don’t like staring at a computer screen for hours. But, I don’t know, now that I’ve been doing this for a while, I’ve become more annoyed at its limitations, mainly in logistical concerns like extracting parts and the sizing of paper.

SY: So you’re faced with doing it yourself or hiring somebody, which maybe isn’t a great option.

ML: Yeah. I mean I can’t afford it. So my plan, hopefully when things kind of open up a bit, is to sit down and plug in my strongest scores into the computer just slowly and then eventually I’ll get the hang of it.

SY: One of the things Finale offers me is the ability to hear how all the different pieces fit together. Do you have a complete sense of what the entire score sounds like when you put it on the page?

ML: I have a sense of it, but I don’t really have the big picture, you know, like the continuity, how it moves in time. I have a good sense of sections…shorter lengths of material, but not if my proportions work, etc.  I kind of find it exciting to write without knowing how it’s going to sound. If I have enough rehearsal time, I can shape the piece then.  I mean I tried writing on Finale. I would hit play so often that I didn’t move forward in the piece.

SY: I guess there’s something to be said for waiting.

ML: You have more freedom to sketch and explore your inner sound world; and if your stuff isn’t so pitch-oriented, it doesn’t really help you anyway.

SY: Would you describe your music as being less pitch-oriented?

ML: It definitely has pitch in it, but I think it’s more about structure and textures for me.

SY: Can you say a little more about that?

ML: When I start writing, it doesn’t start from a place of pitch and harmony and those sorts of relationships. I’m more interested in how different kinds of behaviors of sound work with each other. The first impulse is not about what most people expect out of music, you know, kind of an experience that’s evocative of emotions … it’s not so much about the emotive aspect of music. It’s about cerebral ideas, like how can I structure these sounds in this way.  But certainly I am interested in the evocative and visceral…otherwise there would be no point.

SY: Can you talk about a specific piece and some of the things that you were exploring with that piece?

ML: With this Jack piece that I’m writing, my experimentation in the structure is that I sort of cannibalized other string quartets. I just took the structures of them and I wrote over them. And then I fragmented them and I’m putting them back together. So all the parts are written separately, and then I’m trying to link them together just to kind of see what happens. . . because like I said, the thing is if you’re just kind of trying to write from your inner ear, to me it’s always going to be a little bit limited, because your experiences are limited.

But if you put yourself in these positions and tight places that are new to you, then you’re giving yourself opportunities to respond to it in a fresh way, and to put together something that you wouldn’t have if you just sat there and tried to dream it up on your own.  I do also work in an intuitive-improvisatory way with my material, but it is in negotiation with the mindful work I’ve put in.

As Michelle and I discussed, our creative processes are very different, so I really enjoyed learning from her perspective. I wish her and the other finalists the best of luck in September, and look forward to hearing the music.