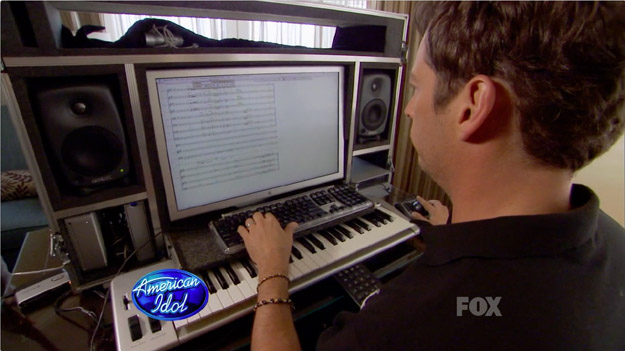 Singer, actor, composer, pianist, and Grammy winner Harry Connick, Jr. was great on American Idol last night (Tuesday, May 4). He appeared as a mentor, helping the remaining five contestants prepare to perform Frank Sinatra songs. What’s more, Harry wrote the arrangements and orchestrations for all five contestants – in Finale. He also accompanied each performer in the competition, and several members of his touring group augmented the orchestra as well.

Early in the show there were some great scenes of Harry using Finale on a portable “studio” made up of  a computer and flat screen, MIDI keyboard, and speakers in a single road case. Very cool — especially if you don’t have to carry it yourself!

As Harry talked about his score they went to a close-up on what was clearly Finale: 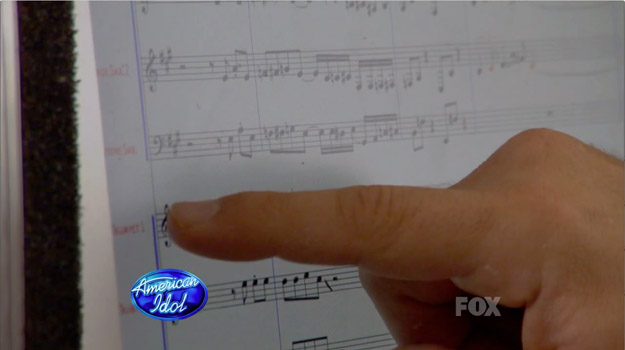 You also saw Harry and his trio working individually with each contestant prior to their performance on the show, and in these scenes you can see Finale-created notation displayed on the electronic music stands Harry tours with. In Teresa Riordan’s 2002 New York Times article Harry talked about using Finale to eliminate printed sheet music on tour. Regarding his Finale-based system Harry said:

“Oh man, it’s made my life easier,” Mr. Connick said. “Before, I would write out a song by hand and give it to a couple of guys in the band who are copyists and they would figure out the instrumental sections. It could take days. Now I can write a new score in the morning and everyone has it on his computer screen in the afternoon. Imagine if a Duke Ellington or a Stravinsky had had a system like that.”

Harry will return to American Idol tonight to perform and to learn which of his protégés will continue to the next round.

Did you see the show? Tell us what you thought of it by clicking on the “Comments” button below.