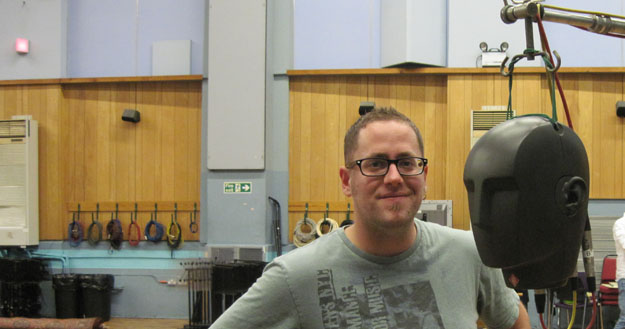 Senior product manager Justin Phillips with “Fred”, the Neumann KU-100 binaural dummy head,
one of  many mics being used at Abbey Road to record the next Garritan library

In May MakeMusic announced a new partnership between Garritan and Abbey Road Studios. This week the rubber hits the road: We’re at Abbey Road in London starting work on a new Garritan sound library.

The sessions are going quite well, and while I can’t let on about what instruments we’re doing or which library we’ll release first, I can say that it’s sounding amazing so far! We started in Studio 1 and just moved to Studio 2, which is arguably one of the most famous studio rooms in the world.

I’ve just learned that the Abbey Road album photo, with the Beatles walking across the zebra crossing, was taken 43 years ago this month. Do you share my fascination with Abbey Road history? Check out this new book, “The Best Studio in the World” – it contains some fantastic photos and info.

I hope to share some more Abbey Road discoveries over the next week or so.