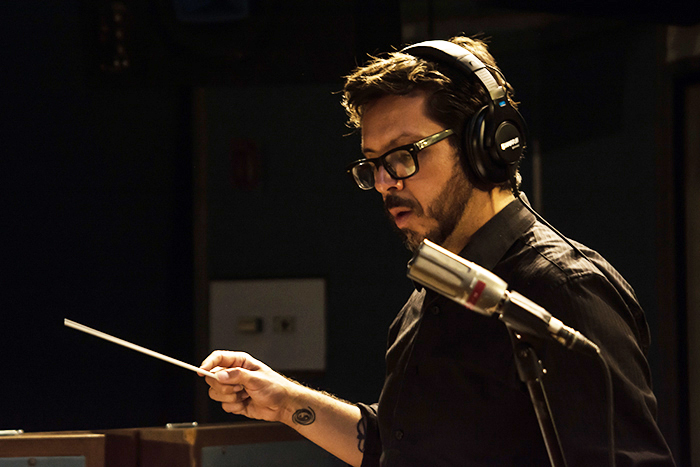 Felipe Perez Santiago is a Mexican composer, arranger, guitarist, conductor, and sound artist who enjoys a tremendously varied musical career. In addition to some long-running high-profile collaborations (including one with the Kronos Quartet), he’s composed for film, conducted rock orchestras, and much more.

I recently spoke with Felipe about just some of his current projects.

When did you first begin to think that music would be your path in life? Did you have influential musical mentors as a very young person?

I started with music at a very early age. I was about 6 or 7 years old. My mother tells me that I was singing all the time. One day she asked me, “Where did you learn those songs?” I replied, very seriously, “These are my songs, I composed them.” At that moment she and my father decided to take me to music lessons.

Although I am the first and only musician in the history of my family, my parents were listening to music all the time (jazz, opera, Mexican folk) and they have supported my musical career ever since.

How did your association with the Kronos Quartet originate?

It started in 2003 with their “Kronos Under 30 Project,” a competition for young composers. I had the amazing luck to win the second commission. The prize was to have them premiere and record a piece I composed for them.

My composition was titled “CampoSanto,” written for live string quartet, prerecorded string quartet, and electronics. It was premiered in 2004 at Stanford University, and the quartet has probably played it more than 100 times since then, all over the world. It can also be heard on the album “Kronos Under 30.”

In 2007 I received another commission from the Kronos which resulted in “Encandilado,” a beast for 300 pre-recorded quartets and a live part which was premiered at the Saint-Denis Festival in Paris. After that I started a great relationship with former Kronos cellist Jeffrey Zeigler with whom I have recorded two albums. I have written four pieces for him and we have performed as a cello/electric guitar duo. 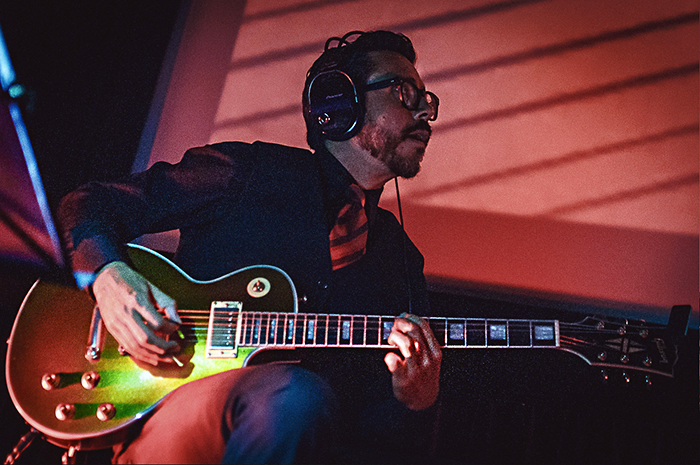 You’ve received commissions from orchestras around the world. I’m sure many of our readers would like to have their music heard more widely. Can you explain how you’ve built this aspect of your career?

Well, there are many ways to approach orchestras and ensembles worldwide. The easiest is to simply contact them directly. Sometimes they are eager to play new music (sometimes not). But it can be as simple as sending an email telling them you are interested in a collaboration.

Another way is through competitions. There are hundreds of composition contests all over the world each year. I’ve had the good fortune to have won several of them. And then one day the phone just started to ring…

You also were composer on the very successful film “Rudo y Cursi,” which premiered at internationally at the San Francisco International Film Festival and was screened at both Sundance and Tribeca. How did your relationship with the Cuaron brothers begin?

The relation started in a very funny way. I was in Venezuela for the premiere of Mariana Rondon’s “Postales de Leningrado” which I wrote the music for.  I got an email from Carlos Cuarón’s office indicating that he was interested in working with me. I didn’t know him personally, but obviously I replied and said that I would love to.

While I was not living in Mexico at that time,  I had a concert there in a few weeks, so we met for coffee. The story I learned from Carlos was that he was in his car driving to his office when he heard “CampoSanto” on the radio. He stayed in his car until the piece finished because he wanted to know who the composer was. When he learned that it was a Mexican composer he told his assistant, “Find me this guy, I want him for the music of Rudo y Cursi!” And so it happened.

Rudo y Cursi was directed by Carlos and produced by Alfonso (whom I had the great pleasure to meet during the process), together with Alejandro Gonzalez Iñarritu and Guillermo del Toro (talk about a dream team). Since then Carlos and I have worked together on several projects and remain great friends.

How do you describe the Mal’Akh Ensemble?

Mal’Akh is my personal laboratory, my favorite toy and the prodigal son. Is the project I’ve dreamt of all my life.

When I was a student at the conservatory I got to know the music of composers Steve Reich, Philip Glass, and Michael Nyman. Independently from their music, which really shocked me at that time, I was fascinated by the idea that they all had their own ensemble in which they could perform their music. This allowed them to write music all the time for these ensembles without having to pursue commissions from orchestras or other ensembles.

And I thought, what if I can combine my passion for progressive rock with a contemporary ensemble? So I founded an ensemble where classical and electric instruments could coexist together. The main premise of Mal’Akh is to include musicians and artists from any discipline. We have collaborated with jazz, rock, folk and classical musicians.

We’ve worked with the Mexico City Philharmonic Orchestra and the municipal Symphonic Bands of the cities of Puebla and Queretaro as well as with some of Mexico’s most important singers, including Eugenia León, Tania Libertad, Magos Herrera, Regina Orozco among many others. We’ve also worked with film makers from more than 30 countries for our project “Animalik,” a series of short animated films with live music. This project has been traveling all over Mexico, the US and Latin America. Mal’Akh is a big playground, we even have an adult show where we play over erotic films and we have a whole theatrical setup.

I see it as more than an ensemble, as a platform for all kind of artists that would like to collaborate with us and create new projects enriching with this our musical endeavor.

Editor’s note: Here’s just one example of some of the wonderful video you’ll find on the Mal’Akh YouTube Channel:

Recently you were the arranger and musical director of “Rock en tu idioma Sinfónico” that is now double platinum in sales. Can you tell me a little about that project and its reception?

This has been a wild ride.

“Rock en tu Idioma” (rock in your language) was an iconic 1980s album of Spanish language rock music from Mexico, Argentina, and Spain. It included many songs that became classics over the years, and are known by nearly every Spanish-speaking person all over the world.

About three years ago Sony Music Latin America appointed me to make the orchestral arrangements for a commemorative album of symphonic versions of the same songs featuring the original singers of each band. I loved the idea! I grew up with these songs. When I was underage I would use a fake ID to get into clubs to hear these bands play!

So I took the job. Together with Sabo Romo, (bassist of Caifanes and main figure in all this project) we made it all happen. We also enlisted a very close friend of mine, violinist Humberto Lopez, as he is the director of the Camerata Metropolitana. With this amazing ensemble we recorded the album, along with a DVD documentary, and developed a touring show. For more than a year we have been touring like crazy, with me as conductor. It has been fantastic!

How/when did you first learn about Finale? How were you creating notation prior to this?

In the conservatory in Holland where I studied, they were very strict about our notation. I am really thankful for that. They taught me to create beautiful handwritten scores (even though I actually have really ugly handwriting). While still a student I discovered Finale, which was great. Not only did my scores look better and more clear, it was a great time saver to simply extract parts. I always hated doing that by hand.

Today I write and compose directly to Finale.

I love how powerful it is and how I can create any kind of score. My work ranges from more traditional to very modern scores and I can also do it all in Finale. I also love being able to press play to get an idea of the sound I’m creating.

Here are two examples of some of the different types of music I am creating. Velcro has the appearance of a more traditional score, while Frozen, written for Jeffrey Zeigler, contains some more modern elements.

I know you conduct master classes and lectures in Mexico and abroad. Can you think of an actionable tip or concept or exercise you might share with aspiring composers or arrangers reading our blog?

Well, two things I always recommend to my students, and those who attend my lectures, conferences, and masterclasses:

First, you should believe in what you do. Continue writing and performing your music. “You will starve being a musician” is nothing but a stupid cliche. If you are good enough in what you do and dedicate yourself to it 100%, things really can happen. I’ve been doing the craziest things for many years and I’ve always found the support and means to do them.

Second, I always advise musicians to listen to all kind of music. Get out of your comfort zone. If you are a classical musician listen to cumbia and salsa, for example. If you are a pop music player listen to experimental noise. I encourage everyone to look for the interest and beauty in all styles.

Felipe’s diverse career certainly demonstrates the wisdom of not limiting yourself to one genre. Thanks again to Felipe for sharing his time and perspective with us.