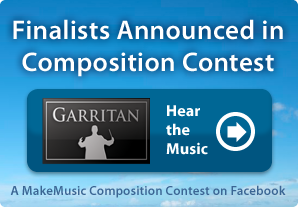 Back in January we launched our “Take Your Music Further with Garritan” music composition contest.

Created to illustrate Garritan sound libraries’ ability to transport the listener, the contest encouraged composers to develop a musical theme to create a piece of music – using Garritan sounds – that evoked their dream travel destination.

Today the contest finalists were announced. Determined by popular vote, the ten compositions that will proceed to the final round are:

The next step will be for the contest judges to identify the contest winners. The results will be announced on Tuesday, April 3, 2012.

I’d like to congratulate all the finalists as well as everyone who submitted a piece—everyone I’ve spoken with has commented on the high quality demonstrated by the entire field of entries.

Please listen to these amazing entries and learn more at the contest site, then share your reactions with us by clicking on “Comments” below.