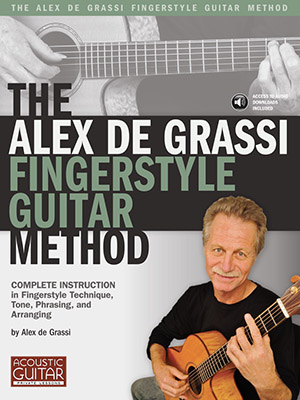 Alex de Grassi is a world-renown fingerstyle guitarist. He initially received international acclaim with his first recording, the genre-breaking Turning: Turning Back, released on Windham Hill Records in 1978. He continues to inspire musicians and fans with his recordings, performances, publications, videos, and workshops.

Alex has just released the Alex de Grassi Fingerstyle Method Book, published by String Letter Publishing and distributed by Hal Leonard. Alex spoke to us about the creation of this new method and the use of Finale for guitar notation.

Scott Yoho: Can you tell us a little about your history of using Finale to create guitar music?

Alex de Grassi: I first encountered Finale at the NAMM show in Los Angeles circa 1991. At the time, I was well into transcribing my first book of solo guitar music (The Alex de Grassi Guitar Collection) for Hal Leonard, and I was doing it the old fashioned way—with pencil and paper… …and eraser. As I was a novice at transcription working on music mostly in alternate tunings, the process was excruciatingly slow and painful. Fortunately, I was working with a very experienced and talented editor, John Cerullo, who patiently guided me through the finer points of transcription.

I was able to do the last piece for the book using Finale. Aside from the obvious benefits of making changes without an eraser, and being able to quickly copy and paste redundant measures in the music, I was impressed with how clean and uncluttered the music looked onscreen, even with lots of fingerings, articulations and expressions. I quickly came to realize that this was the future.

S: What was your inspiration for the Alex de Grassi Fingerstyle Method Book?

A: I’d been thinking of writing a method for several years when David Lusterman at String Letter Publishing approached me with the idea of some type of instructional guitar book.  My goal was to write a book that would take a complete beginner from A to Z but would also function as a very thorough reference book for experienced fingerstyle players.

The first half of the book takes players up to an intermediate level by covering basic right and left hand technique, chord voicings, arpeggios, rhythms and articulations. The second half deals with advanced topics: cross-string technique, polyrhythms, alternate tunings, and orchestrating individual voices to achieve a “3-D” sound.

S: Can you tell me a little about how the book was created?

A: I wrote the text in Word on my Mac laptop and created all the musical examples in Finale on my studio Mac with a screen capable of displaying two pages of music simultaneously. Using two computers allowed me to easily move from words to notes without interrupting the workflow. Jeffrey Rogers was my editor, and Andrew DuBrock edited and set the musical examples. When the second draft was complete, Dan Gabel at String Letter began extracting video scripts and we began the audio/video recording. It became apparent pretty quickly that the video scripts would have to seriously abridged to make for good video. As they say, a picture’s worth a thousand words!

The book is available in both hard copy and digital formats with access to audio downloads of all 200 music examples. The video can be purchased additionally as a download and the individual sections are also available as downloads.

S: What guitar-specific notation challenges have you solved using Finale?

A: The guitar is a polyphonic instrument with a tremendous potential for dynamics and timbre. Giving nuance and articulation to individual lines requires a lot of attention to detail in composing, arranging and performing as well as in the process of transcribing. Trying to get all that information laid out on one (or even two) staves of music can be a real challenge.

I generally use the Speedy Entry tool and find Finale’s “four layer” system key to delineating the individual lines, or “voices”, in the music. I typically assign each voice to a separate layer. That not only helps me to visualize what’s going on polyphonically, but it makes it easier to modify individual lines—changing note values, adding rests, adding articulations etc.—without interfering with the other voices. Finale also allows each layer to be split into two voices—v1 and v2. This feature requires a little more finesse, but I find it useful for short passages in which a voice, let’s say a secondary bass line or countermelody, splits off the main line for a measure or two.

I often have a tablature stave as well, particularly for music in alternate tunings. Because much of my music is played high on the fingerboard combining notes played on open and fretted strings, and because there are often large fretting hand position shifts within a single measure, there’s usually some guesswork involved for both Finale and myself as to which strings the notes will be assigned. I often leave the “lowest fret” box set to 0 and then correct any fretted notes that were assigned to the wrong string afterwards, but sometimes it’s faster to set the number to the lowest fretted note and then correct any open string notes that show up as fretted notes.

S: Have any other Finale tips you can share?

A: I suggest learning as many keyboard commands and shortcuts early on as that will save you time and help your workflow. Plan ahead; think about the overall look and layout you want—stave spacing, positioning of articulations and expressions—so you’re not going back and editing earlier measures for consistency. When copying measures or partial measures, look to see that all the staves are edited before copying them to other locations in the music, to avoid further editing. When transcribing music with compound meters, work out your beaming scheme in advance.

S: What’s next on the horizon?

A: I’m composing a series of pieces for two guitars—classical and steel string—called the Zero Gravity Suite. It’s dedicated to astronaut Dr. Thomas Marshburn and the crew of mission 34/35 who have just returned from the International Space Station. Tom took one of my CDs with him on the space shuttle Endeavor a few years ago, and I have been in contact with him during his recent stay on the space station. I’ve recorded the first segment with Andrew York, founding member of the Los Angeles Guitar Quartet, and we plan to record the rest of the suite later this year. I actually got to play that recording for Dr. Marshburn during a videoconference while he was aboard the Space Station!

I’m also preparing to make a solo recording using many of the guitars I’ve collected over the years—various six strings, a harp guitar, 18-string sympitar (with sympathetic strings), high-strung or octave guitar, and baritone guitar. And, I hope to publish a series of steel-string guitar studies in the near future, using Finale of course.

Of course! I’d like to thank Alex for his visit to the Finale blog.

Please let us know what you doing with Finale by clicking on “Comments” below.