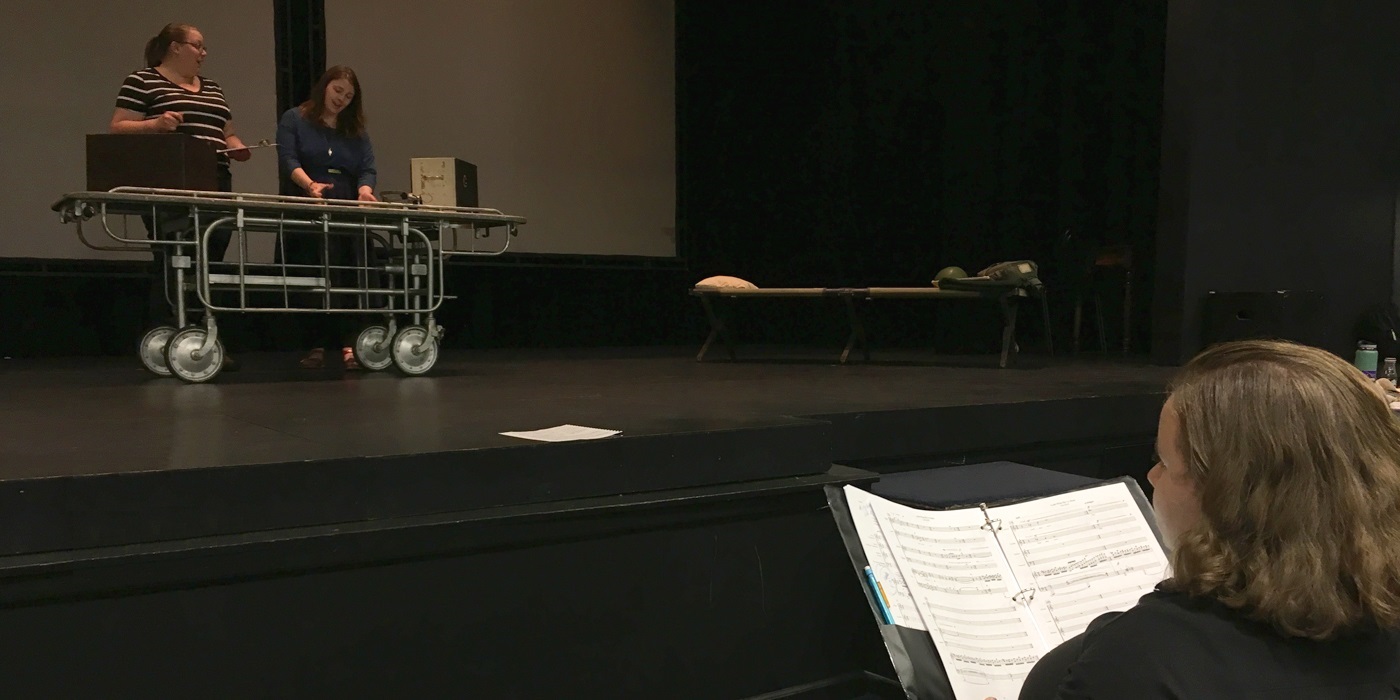 When you give your composition to the musicians who will perform it for the first time, it transitions from a personal musical expression to a shared one. This can be a nerve-wracking transition for both composer and performer. As the composer, did you put everything on the page that the performers need to understand your piece? As a performer, will you be able to embody and communicate the composer’s vision? The University of Colorado at Boulder’s College of Music is working to ease this transition with the CU New Opera Workshop (CU NOW).

This program allows professional operatic composers and librettists like Jake Heggie, Gene Scheer, Tom Cipullo, and Mark Adamo – as well as student composers studying at CU – to spend several weeks workshopping their compositions with the musicians who will premier these works. This allows the composers and performers to play and collaborate. The transition to a shared musical expression is no longer a simple hand-off. It is a process that allows the new composition to evolve and grow through this collaborative workshop.

Dianna Link is a rising junior at the University of Colorado at Boulder’s College of Music and one of the up and coming student composers participating in CU NOW this year. She graciously took the time to share her thoughts about composition, the workshop process, writing for the voice as an instrument, and using Finale!

Tell me about your musical and compositional background.

I can’t remember a time when I wasn’t doing music. From an early age, I have pursued many different forms of music making including learning the flute; singing in the choir; performing in musicals; playing in jazz band, marching band, and orchestra; arranging music, and most recently compositing my own music.

In my junior year of high school, I pursued private flute lessons for the first time and I showed my flute teacher my arrangement of Have Yourself a Merry Little Christmas. My teacher loved it and encouraged me to write original music. So I did. I was taking an AP music theory class at the time, and for our final project, we had to compose a piece. I wrote a piece for flute quartet, The Music of Water. Everyone seemed to like it. My flute quartet was recorded and broadcast on Colorado Public Radio and performed at the National Flute Association Convention.

I was empowered and ready to take on the world and write anything.

At the end of my junior year, I suffered a personal tragedy and became extremely depressed. Rather than allow depression and bitterness overwhelm my life, I decided to express my feelings using my new found superpower, composition. I wrote a piece for full orchestra; my first piece for an ensemble other than flute quartet. I fell in love with the orchestra, the endless colors and textures that could express limitless feelings. I felt freedom in writing for orchestra, as if anything was possible and haven’t looked back since.

Where have your compositions been performed before this experience with CU NOW?

My compositions have been performed by the Colorado Symphony, The Denver Young Artists Orchestra, and the Bel Canto Flute Academy. It’s been performed at places such as Boettcher Concert Hall; the Galway Flute Festival in Weggis, Switzerland; the Andrea Bocelli benefit concert at the Teatro del Silenzio in Lajatico, Italy; the National Flute Association Convention; and Pendulum New Music Series.

Is this your first time composing an operatic work? How is the process of composing opera different from the process for other musical forms?

Although I have sung in a musical theater/choir context, I never paid much attention to the importance of the placement of certain syllables in the music. In addition, opera is theatrical. When writing in an operatic context, the music needs to support the story and move the story forward. Writing opera is more than writing a series of songs that fit well together, it is combining music, voice, and text to tell a story.

Who have your mentors been during this process?

I had an amazing opportunity to work with one of the best composer-librettist teams writing new opera today, Jake Heggie and Gene Scheer. In addition, I worked with my composition professor Carter Pann as well as the visiting composer in residence for the composition department at CU Boulder, Sarah Kirkland Snider.

What has it been like to work with Jake Heggie & Gene Scheer?

Working with Jake Heggie and Gene Scheer was an amazing experience. Throughout the year, I was able to bounce ideas off of Jake and Gene and get helpful feedback while I was writing my opera. I worked on my libretto with Gene in the fall, and he helped me explore the possibilities of my story as well as solidify text that would tell my story in a captivating way while lending itself to music. I worked with Jake on the music of my opera in the spring, and he helped me understand the process of writing for voice as well as creating compelling music that adds another layer of expression to my story.

What is the plot of your opera and how did you decide what you wanted to write about?

My opera is about two women who helped work on the atomic bomb as part of the Manhattan Project in WWII. My opera takes place in a secret city that was created for the purpose of developing the atomic bomb; Oak Ridge, Tennessee. Over 80,000 people, primarily women, were employed in Oak Ridge, and very few of them actually knew what they were working on. In order to keep the developments on the bomb a secret, the city was not on any maps and employees were not told what their jobs were. As an extra security measure, spies were hired to investigate Oak Ridge employees to make sure they were not talking about their jobs to anyone.

My opera focuses on the moment when the world learned about the secret of Oak Ridge. Alice and Laura are listening to the radio along with the rest of the world as President Truman announces the atomic bomb used on Hiroshima and the involvement of Oak Ridge in the development of the bomb. Alice and Laura have both been affected by the war in different ways, and have extremely different opinions on what the end of the war means to them, and they have conflicting reactions to learning about their contributions to the atomic bomb.

Are you enjoying the process of writing the libretto? How is it different from other creative writing you have done before?

Writing a libretto is an art form within itself. It is unlike creative writing that I have done before because it requires a balance between writing poetically, writing dialogue, and leaving room for musical expression. It is unlike writing a narrative because it is in the format of dialogue, and it is unlike a script because the words have to move the story along while lending themselves to be sung. I enjoyed writing my libretto because it challenged my creativity by forcing me to imagine music within the words that I was writing while pushing the story forward.

How were you introduced to Finale?

I received Finale as a high school graduation present. I learned to use it over the summer when I orchestrated a piece to be performed at the Andrea Bocelli benefit concert at the Teatro del Silenzio in Lajatico, Italy.

I like the flexibility that I have to personalize my score to the needs of the music. Finale makes it easy to make detailed scores that are engraved at a professional standard.

I like to use the music spacing options under the Utilities menu to help clean up my scores and minimize manual edits when engraving my scores.

What is it like to see your composition move from score to floor?

It is breathtaking to see my composition move from score to floor. I have been working on my opera for about a year, and it is the most amazing feeling to finally see my hard work come to life. Until about three weeks ago my opera was just an abstract idea in my head, and now it is a living, breathing piece of art.

I don’t know what it is, but I always bubble up with excitement when I hear someone play my music. When I hear a piece that I wrote performed for the first time, I always get “composer’s glow.” My heart races a million miles an hour and all I can do is smile. I feel that for a moment I have done something important.

What has been the best part of the CU NOW experience?

The best part of my CU NOW experience is the collaboration. Composition is often a solitary activity, and I love the opportunity to bounce ideas off of other creative people to create something bigger than I could do on my own.

Normally when I work with other musicians/ensembles on my music, I get to attend one or maybe two rehearsals and get to give one piece of feedback. As part of CU NOW, I get to be a part of the entire rehearsal process and can work with the singers as much as needed to help achieve my creative vision. I really appreciate the collaborative environment because it pushes me to learn from other creative people and think about music composition in a different way.

I want to thank Dianna for taking the time to share her experience in the CU NOW. It was wonderful to experience her passionate and thoughtful composition process at work! If you are in the Boulder, CO area check out all the CU NOW performances at the Imig Music Building on CU’s Campus.