In a recent Finale Blog post we met composer, author, and orchestrator Steven M. Alper, a long-time user and friend of Finale. This time, responding to a request from a Finale blog reader, Steven has kindly agreed to share his insights to preparing music for Broadway.

First off, I’d like to point out that preparing music for Broadway is little different from preparing a score for any other form of musical theatre (in the theatre, the entire set of songs and instrumental pieces is referred to as the score) whether it be off-Broadway, off-off-Broadway, regional theatre, etc. It’s really just a matter of scale.

Most of the process of modern computer music preparation for Broadway (and musical theatre in general) is a direct outgrowth of many decades of hand-copying. In the late ‘80s and early ‘90s, under pressure from the producers, many of the Broadway copying supervisors made the decision to begin the process of shifting over to computer copying (using Finale, almost universally). They took their many years of experience and imposed the standards and procedures that had served well in the past on music copied using computers. To this day we still create parts that would be familiar to a copyist from the 1960s.

To understand what makes copying for musical theatre unique, it’s important to recognize that the fundamental underlying beast with which the copyist wrestles is change. I can’t think of another music-based field in which the material is potentially subject to such a great amount of revision. These can entail anything from taceting an instrument to cuts to insertions to wholesale replacement of numbers. And it’s the many years of experience of handling these kinds of changes that led to the basic rules of thumb the leading hand copyists used and that we still employ.

There are four relatively distinct phases of copying music for a show.

Pre-production is the time when rehearsal piano-vocal music is prepared. These may or may not be prepared by the supervising copyist, but will become the basis for the orchestral score. Even before rehearsals start, numbers which are not expected to change significantly may be released to the orchestrator to begin work. The copyist will prepare a template to the orchestrators’ specifications. For each number, the copyist pours into the template (or manually copies, if the rehearsal piano is handwritten) the vocal lines and the rehearsal piano part (which will be used as a sketch).  Next they lay out the score to a standard 4 bars per page, adjusting for proper phrasing (meaning to accommodate for music that does not fall into regular 4-bar phrases). If the orchestrator is working by hand, Show Rests in Empty Measures is of course turned off for all staves except the rehearsal piano and vocal.

In this phase we will begin to see changes and revisions. Generally these are communicated to the orchestrator who will inform the copyists of what is needed (assuming the copyist has already received orchestration to work on). During the rehearsal period, hopefully, the bulk of the rest of the material will be released for orchestration. I say hopefully because the end of this phase leads to the event demarcating this phase from the next: the first orchestra rehearsal.

Because rehearsal time is expensive and necessarily short, parts are laid out according to some fairly strict rules which are designed to accommodate potential revisions and changes, and to assure that the music is as clear, comprehensible, and usable, as possible. Some of these include: eight stave first pages and ten staves on the following pages, all phrases and rehearsal letters or numbers begin at the left margin, double-barlines at the right margin, the use of instrument change warnings and new instrument labels, rests at every page turn (even if it means tossing out most of the other rules); and never having a page turn fall during an instrument change. Parts typically have 4 bars per line, and no more than 8 (have you ever tried to hand-write 12 bars of 16th notes on a single line to avoid having to reformat?) and no more than 8 bars of rests without cues.

While new orchestrations may continue to come in, this is the period of most intense change and revision. Since the players will have made many marks on the music, to avoid reprinting entire parts and having to transfer all those marks for the players, it’s become standard procedure to print only the areas that have changes and paste these over the existing parts. So we try to lock down the layout as much as possible to prevent unaffected areas from losing their formatting. And limiting the parts to 4 bars per line means we can, for example, accommodate an 8-bar insert by changing 4 lines of 4 bars each to 4 lines of 6 bars each.

By the way, there’s a kind of Murphy’s law which states that all revisions will eliminate page turns or time to make instrument changes. This will of course require a more extensive type of layout modifications (try this on a bass part where you’ve squeezed 150 bars onto two pages in order to get to that one bar rest for a page turn).

Not all revisions are done at the computer. When we’re at the theatre and are informed of the need to make changes to the parts too quickly to go back to the office and print them, sometimes hand-correction is the fastest way to go. We’ll hand write the fix on blank staff paper, cut out the hand-fix and paste it over, just as we would with a printed fix.

When we go in to do our patching, whenever we have time we will look through the parts to see if there’s anything we can clean up to make the players’ lives easier.

At some point before a show’s official opening, a decision will be made to “freeze” the show, meaning that no more changes will be made. This call can be made any time prior to opening night, but I’ve been in situations where I was passing out new material to the orchestra just before curtain on opening night. This brief freeze period will give us time to sort out loose ends, take care of issues we haven’t had time to deal with, and to handle player requests (for layout changes, replacement of childishly scrawled and illegible rewrites, and the like).

Shortly after opening, if the producer feels that the show has a shot at a longer run, the copyists will be permitted to do a cleaning. In this, the last phase, the master files will be updated with all of the changes that were done directly to the parts (e.g., dictated to the players or hand-written by the copyists), as well as any other improvements and beautification deemed of value. These may include note fixes or changes, changes to instrument changes, cuts and other revisions, articulation additions, lyric changes, cue adjustments, layout improvements, etc.

Here’s a photo of a “short stack” of photocopied player parts, in preparation for a cleaning: 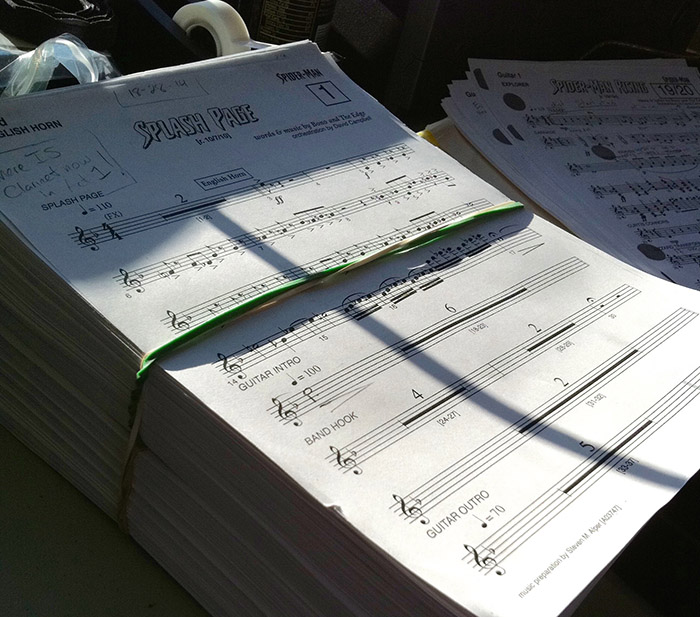 Granted, every show is a different animal and everything I’ve described above is subject to change. (I’ve also omitted two special circumstances: cast recordings and preparation for publication for a licensing house, which involve many of the procedures mentioned above.)

In Spider-Man: Turn Off the Dark, there was one particular number that was almost 400 bars long. For most of the parts the accordion-folded music for the number was about 1/4″ thick (even thicker for the keys and percussion). Spider-Man‘s troubled path saw its original director replaced after many, many months of previews (a typical Broadway show will have three to six weeks of previews). With the new director came a new vision, which included a new script, new music, and extensive revisions to the existing material. The production was shutting down for several weeks for the retooling. We received the direction to do a cleaning of the existing material to prepare the files for these changes. The parts for that particular number looked like snakes that had dined particularly well. They bowed outward in the middle from the quantity of revisions the number had received. There were patches over patches over patches, patches across patches, pages shoved into the middle to be pulled to the side. Some of those 1/4″ parts bulged to almost a full inch by this point. (The revision of this number that was played on opening night was cut it down to nubbins.)

Are handwritten or engraved-looking fonts the standard? For everything? Are there specific fonts that are particularly well (or poorly) received?

Many of the decisions about what the music ultimately looks like come from feedback from the players. In the early days we played around with handwritten font styles. Some players swore they preferred them until we actually put them on the stands. But it became apparent that the more traditional, engraver-ish fonts gave a greater sense of precision and accuracy. We’ve continued to play around with different fonts, but I’ve pretty much settled on Maestro for its weight and clarity (although I do use some Petrucci articulations which are more elegant and require less real estate).

Is there a standard size for parts, and a typical type (and color) of paper? Are pages taped together, in a book, loose, or ?

For Broadway and shows of similar scale, we use a special 9-1/2 x 12-1/2” heavy stock, taped accordion style, with each number taped separately. What the players end up doing with their parts can be wild; cutting them up and taping them in a different layout, tearing off cover pages, inverting the accordion folds. On one show, the bassist taped the entire first act together into a single accordion.

For out of town or off-Broadway or short runs we may use regular 8-1/2 x 11” letter size paper, printed or taped back-to-back. This of course has its own set of problems since every right hand page must accommodate a turn – there’s no option to have 3 rest-free pages with the marking “OPEN 3 PAGES” on the first page. But it is a much easier size to deal with when printing to unfamiliar printers or when photocopying the parts.

Thanks again to Steven for taking his time to share his experience with us. Have a question for Steven, or a request for future topics? Please let us know by clicking on “Comments” below.