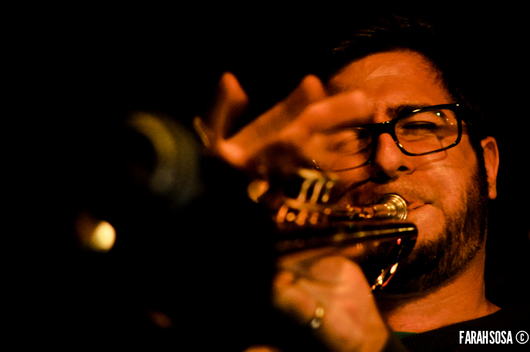 Los Angeles-based trumpeter/arranger/orchestrator Todd Simon is all over the map. Comfortable in such diverse genres as electronica, pop, soul, hip-hop, and world, Todd has worked in video games, film scores, and has provided horns and strings on hit records. He’s also a full-time High School band director. Check out his website bio and discography for the details.

One of Todd’s many skills is his ability to collaborate with producers of music genres not typically associated with notation, and as he describes below, even then Finale is part of his workflow.

Scott Yoho: Where did your love of such diverse styles of music begin?

Todd Simon: I began teaching myself the piano at the age of five and trained as a vocalist in elementary school. At eight I fell in love with the trumpet. I was classically trained on the trumpet and was fortunate to receive proper training in conducting throughout my teens. Upon entering high school I ventured deeply into jazz, studying with the likes of Buddy Collette, Gerald Wiggins, Bobby Bryant, and Wynton Marsalis. It didn’t take long for me to find huge connections between hip-hop and jazz.

SY: Can you describe what form your arranging work most often takes? Are you creating horn charts from scratch, or translating midi keyboard parts into something folks could play?

TS: My arranging work varies from project to project. I love never knowing what new challenge is just around the corner. I started out using Finale to create horn parts for my own personal ensembles and classes. Sometimes I am creating live instrumentation from scratch for an artist or producer. A film or video game composer might send me ideas created via MIDI that I then need to expand and create parts for either a sample library or live musicians to play.

A great example of this was when I worked on the LA Noire video game with the composer Woody Jackson. Woody would send me some amazing live tracks of noir film-inspired jazz rhythm section grooves. My assignment was to create 12-tone melodic sequences both live on trumpet, flugelhorn or French horn and within Finale to then be later plugged into a high end string ensemble sample library. We had so much fun with the 12-tone sequences that we ended up charting out various melodic lines off of one 12-tone row and had many different instrumentalists record them.

SY: Where and when did you first discover Finale?

TS: I grew up notating music by hand and stayed on paper as long as I could until work consistently started coming in to orchestrate and conduct full orchestras on a quick time crunch. When I was naive and younger I actually frowned upon using computers to notate and even record music.

Finale saved me so much time when I first used it professionally for the 2005 Red Bull Music Academy ArRange concert where I was working between arrangers and DJ/producers including Claire Fisher, Eumir Deodato, OHNo, Underground Resistance and Kirk Degiorgio as an orchestrator, copyist and conductor. We employed Seattle’s Northwest Sinfonia to back up live ‘sound clashes’ created by the arrangers and producers. I had literally one night to orchestrate two major pieces that were given to me the moment I got off of the plane. Finale offered me ease of use. No way would I be able to have sheet music for every musician overnight. Finale sped up the process.

Finale has evolved into a much more seamless system for music engraving since I started using it over ten years ago. I love how the software has minimized many functions that used to be quite a burden to manage such as page formatting, moving components around, customizing fonts, etc.

SY: Can you describe how Finale fits in your workflow?

TS: Finale is essential to my daily workflow. I am charting out everything I arrange into Finale, even if I’m working with musicians who don’t read music. I can send a midi audio file over to musicians as a reference and I know that I have everything archived in case I need it in the future.

I’m emailing new arrangements to my own groups; collaborating on new pieces with colleagues; modifying charts in the studio if needed; creating worksheets, quizzes and test for my students; etc.

SY: How would you describe why an artist would choose you to do arranging work for them?

TS: Artists, composers and producers choose me as their arranger/orchestrator because they know that I will nail the sound and style they are looking for. I am known for my ability to adapt to many forms of music. I love my work because I am rarely working on the same type of music.

I work with singer/songwriters, world music artists, film/tv/video game composers, indie-rock producers, electronica dj’s and so much more. Many clients in the hip-hop world hire me to re-create samples for them. I’m given an original recording that will then be transcribed and re-arranged to be used as if it were a sample. I have honed the craft of being able to notate music to get musicians to phrase and articulate verbatim with the requested style. As hip-hop continues to evolve, the material I get to work on is getting more diverse and rich. A recent session I did for Odd Future was on a beautiful – almost Phillip Glass vibe.

TS: I’m shocked to hear from fellow Finale users that do not utilize the command-shift-M (Mac)/Ctrl-M (PC) function. I love keeping my charts in order for myself and for my musicians. Locking measures into 2, 4, or 8 bar systems (or 5 bar systems when creating 1st and 2nd endings) keeps music easy to read and follow. Most of the time I am writing music for a studio session where musicians are sight-reading, so I am constantly shifting my systems around to minimize any room for error.

SY: Can you share a story where you saved the day with Finale?

TS: Finale saved the day at the second Arthur Verocai concert in Los Angeles. At sound check he came up with a ton of modifications to his beautifully lush arrangements. He was inspired by the ensemble and re-harmonized various sections. Arthur works with a copyist back in his hometown of Rio de Janeiro and it was 4:00AM in Brazil and he was worried that there was not enough time to get his new ideas in place for the show. I spoke up from my chair while pulling my laptop out and offered to help. We had updated charts for everybody within twenty minutes!

I’d like to thank Todd for sharing a few helpful moments with us, too. Tell the story of how you saved the day with Finale by clicking on “Comments” below.