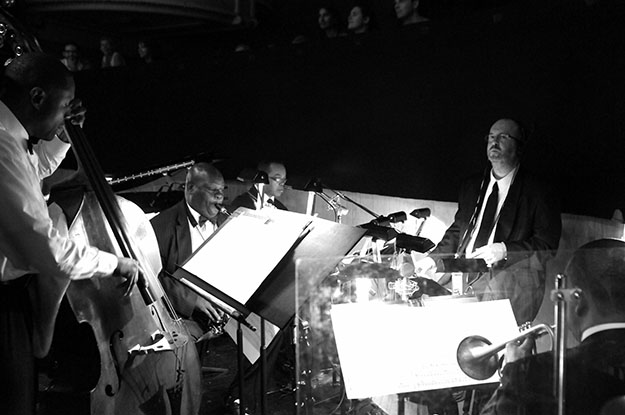 Wynton Marsalis’ music supervisor, Jonathan Kelly, described for us their workflow for the creation of the new music, and Finale’s role in the process.

Scott Yoho: Let me get this straight: You had about two days to rehearse an evening’s worth of new music before going in the studio to record it. Two days before that, this music didn’t exist anywhere but Wynton’s head?

JK: Something like that. It might have just been one day of rehearsal and then one day in the studio, maybe two days in the studio. It’s not a lot of time.

A few days before the first rehearsal, I got a call from Wynton, and he said; “Okay man, let’s start doing this.” Then I spent something like 48 straight hours working on this music — there are eight individual songs, or movements. He’d finish one, and I’ll start working on it. He’s working on the next one. We’d kind of trade in that fashion.

SY: And Wynton doesn’t’ bring completed pencil sketches, he creates them on the spot?

JK: That’s exactly what he does. He still sits at the piano and composes straight pencil-to-paper. In this case, the instrumentation is septet, so it’s four horns, piano, bass and drums. He hands me piano reductions, where it’s pretty clearly orchestrated who is playing what, and I make a score and the parts. That said, I don’t know when he starts to conceptualize some of these songs: I know he is someone who is thinking a lot.

But by the time he sits down with the pencil he is composing a song basically one-for-one to me copying: He will hand me a page, and I’ll start to copy it. By the time I finish the first song, he is usually ready to give me the second set. So when I say that I work with him a couple of days ahead of time, it’s a little bit of an exaggeration just because by the time we got to our first rehearsal, we weren’t actually finished yet. I’m always coming into rehearsal working on the subsequent pieces. Then, maybe that night after that rehearsal, I finish the last one.

[See the process: Wynton’s original sketch of Bayou Baroque and the resulting score in Finale.]

SY: Your workflow has to be VERY efficient.

JK: Over the past decade or so we’ve just developed technique that never could have happened fifty, sixty years ago. From the editing we’ve done for the symphony, or the mass Wynton wrote for the Abyssinian Baptist choir, to the new music for concerts with Eric Clapton, or Paul Simon, the sheer volume of stuff that we do every year, it just wouldn’t be possible without Finale.

SY: After you completed the recordings, you sent them to Garth Fagan, and they rehearsed with them all summer. I understand that they become accustomed to even the improvised sections, right?

JK: Right. The music includes improvised sections, and they’ve choreographed to that, too. Now they want to hear certain things, like Wynton’s trumpet solos, they’re used to dancing to, so if he goes and starts improvising on it at the performance, forget it. They get lost in the form or the dance just doesn’t make sense.

SY: So to eliminate this problem, you actually transcribed Wynton’s improvised sections?

JK: Exactly, I transcribed many of his trumpet solos. It was funny because at first I showed some transcriptions to him, and he said, “Oh, I don’t want you to waste your time. I don’t know if you have to do that.” I’ve had similar experiences in the past, so I wanted to be ready. At the end of the first day of the rehearsal, Wynton said, “Oh man I’m glad you did this.”

It’s not what it used to be to sit down with a recording and transcribe a solo: Today it’s much faster. It’s much easier. Plus with Finale you can hear it back; that makes a big difference in transcription. In my case, I’m a bass player transcribing trumpet, hearing something I can’t recreate at tempo. I can’t play it on a piano or my bass fast enough. The playback is just key for someone like me in transcribing.

SY: It’s key for me too, but it’s reassuring to hear that someone who works at the level of you relies on it, too. In our earlier discussion you indicated how these transcriptions differ from a transcription you might create for publication – they’re not ALWAYS note-for-note.

JK: I could probably get by with direction like fast, slow, high and low, but I’m kind of a perfectionist in general. My mind just kind of works that way, so I prefer to transcribe every note. But I do make exceptions.

He has, I call them, Wyntonism’s, technique-driven melodic devices that he can play really high and really fast. When I’d find myself trying to write out one of those note-for-note, I’d catch myself. So there were actually a few points on his trumpet solo, on the printed copy, where he was like, “What does WTS mean?”

For me it’s “Wynton Type Stuff.”

JK: That’s not actually what WTS stands for, but that’s the PG version.

SY: Can you say anything else about how Finale plays a part in your work?

JK: Finale has evolved to the point where the artist is allowed to dictate the workflow and not vice versa. I always draw an analogy between my workflow with Wynton and cultivating diamonds. It takes a very specific environment to create a diamond and it’s an atmosphere where very few things can survive. One change in temperature or pressure, and you’ve got a flawed diamond, or even graphite. Writing music is hard enough as it is. It starts as an idea, then you have to translate it to a visual representation, then many people have to simultaneously interpret your representation. I’m not saying that we always are putting out diamonds, but at least with Finale we have a puncher’s chance.

I’d like to thank Jonathan for taking the time to talk with me and for providing the samples of Wynton’s manuscript and score. Check out some great rehearsal video of Lighthouse/Lightning Rod, and share your thoughts or tell us what you’re working on by clicking on “Comments’ below.