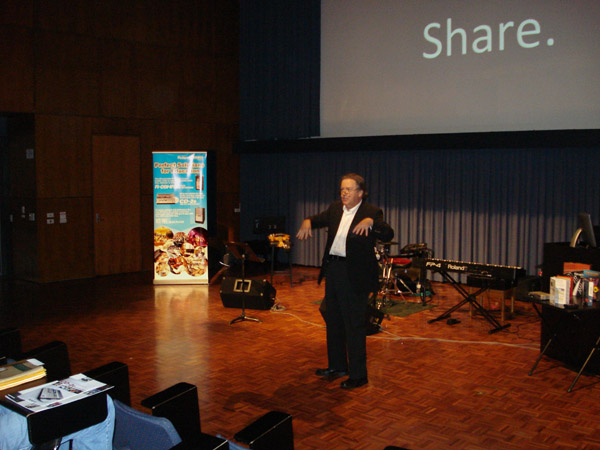 Tom Johnson in Brisbane, Australia (note the warm-up band’s gear behind him)

About a year and half ago, I embarked on a whirlwind tour of Australia with Nick Middleton, sales manager of Intelliware (Finale’s Australian distributor), and Ray Partridge, product specialist for Roland Australia.

I started my adventure on a Friday, flying from Minneapolis to Los Angeles and then from LA to Sydney, arriving early Sunday. To anyone who has not made this flight, it’s very long. Charles Lindbergh himself would have arrived feeling exhausted and grungy, and I’m no Lucky Lindy. So I was probably not at my very best at 8 AM Sunday morning as I walked out of customs and was met by fervent Finale user Julie Simonds, but you’d never know it from her reception.

Julie is a well-known music copyist in Australia. She’s done music preparation of scores for movies including “Babe” and “Happy Feet.” While she’s worked with both Finale and other music notation software, she prefers Finale by far. Julie led me to coffee and we shared Finale talk until I felt nearly human. Then she dropped me off at Terminal 1 for my flight to Melbourne. Once back on the ground I crawled to my hotel, and left word for Nick and Ray that I had arrived and that I’d see them early Monday morning.

And so the whirlwind began. In just over a week we trained dealers in three cities, visited and trained the staff at four “Soundhouses,” gave three Finale 2009 product launches (in Sydney, Melbourne, and Brisbane), and conducted clinics for Griffith University and AMPD (All Music Publishing and Distribution). But wait, there’s more! I also provided Finale training for the entire Roland/Intelliware technical and customer service staff.

While some of the details blur together as I look back today, I wanted to share one demonstration idea that Nick and Ray devised. Before each of our evening product launch demos, they engaged a jazz group to play. They would warm up the audience and, afterwards, I would begin my Finale demonstration. Having a warm-up act made me feel like a rock star, and I briefly thought of demanding a star on my dressing room door and insisting on a lavish backstage buffet. But I digress.

The ingenious part of Nick and Ray’s idea was this: Near the end of the jazz set, Ray recorded the group as they played “Blue Bossa” (using a handy Roland digital recording device) and quickly loaded the resulting .MP3 file into Finale.

Moments later, I began my demo by showing Finale’s Studio View playing an audio file of the “Blue Bossa” performance we’d just heard. At the same time, Finale was recording a piano part I was playing to accompany “Blue Bossa,” and notating my performance as I played. I thought this was an impressive demonstration of Finale’s audio and MIDI capabilities.

As the ten-day tour drew to a close, Nick asked me what I’d do on my one night off (I had Saturday free prior to departing for home on Sunday). As I was staying near the Sydney Opera House, I told him I had been considering going to the opera. He offered to ask his wife, Vicki (who is the general manager of one of Sydney’s larger theaters), to see if she couldn’t use her industry connections to find me a ticket. I wasn’t sure what was playing but was thrilled at his offer.

Upon subsequently checking on-line I found that one of the hottest tickets in the world, Bruce Beresford’s production of Andre Previn’s “Streetcar Named Desire” was playing Saturday night at the Sydney Opera. OMG! I contacted Nick and told him I had no idea that this is what Vicki was looking into and made it clear that she should stop the search.

Finally, after ten straight days of planes, luggage, tear-downs, set-ups, dealers, publishing companies, and enthusiastic crowds of Finale users, I was done. As I checked in at the Hotel’s concierge desk to prepare for a restful afternoon I discovered an opera ticket waiting for me. Vicki had done it anyway!

Having dressed very informally all week, I spruced up in my best suit and tie — the works — and left to have a glass of wine at the Sydney Opera Bar, which Vicki described as “the best bar in Sydney.” From there I walked into the Sydney Opera House to a wonderful seat where I  watched the opera unfold. Imagine Stanley Kowalski singing “Stella! Stella!,” not screaming it as he does in Tennessee Williams’ play!

In recognition of Vicki’s tenacity and generosity I wish I could say the performance changed my life, but frankly Stanley didn’t quite do it for me as an opera character. Nevertheless, I really appreciated the wonderful opportunity at such an exotic and celebrated locale – so very far from home.

On the way back to my hotel I stopped to sit and overlook Sydney Harbor and be thankful for all the wonderful people I’d met that week and the amazing job I have that lets me have such remarkable experiences.