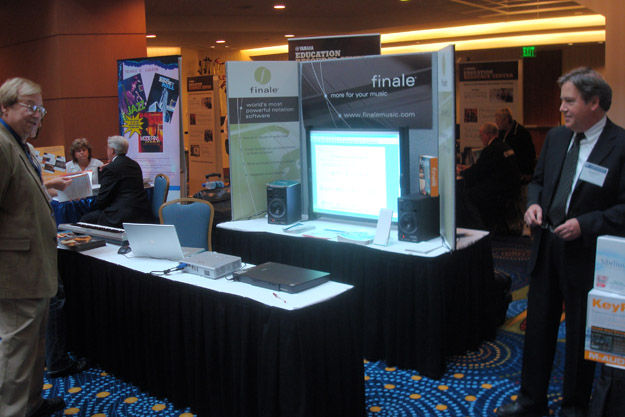 Last week I attended the Fifty-Third National Conference of the College Music Society. Exhibiting at the show were software manufacturers, publishers, educator-focused resellers, and others with products and services of interest to college music educators. There was also an impressive list of clinics, including several in which Finale or SmartMusic were featured.

While I don’t typically attend tradeshows where we exhibit our products, this particular show was held in Minneapolis – between our office and my home – so it offered a rare opportunity to see my coworkers, including regular blogger Tom Johnson, at work demonstrating our products.

As anyone who has seen Tom in action will attest, he is a delightful presenter. He radiates an effervescent enthusiasm that is endearing – and can leave you a little breathless. In the course of a few minutes Tom scanned some choral music (with the publisher’s permission), made two minor edits, and changed the key. Then he used Finale’s Setup Wizard to create a woodwind quartet score, and pasted his scanned music into this blank score. The entire process took less time it took me to type this post.

When Tom pressed “Play,” it sounded like this. (The piece is Gordon Jacob’s “Four Old Tunes.”) I thought this sounded pretty good for something that was a piece of vocal sheet music, in another key, just minutes before.

Then Tom demonstrated Finale’s Tempo Tap feature. Perhaps because much of my personal music making has involved rock bands recording to click tracks, Tempo Tap’s ability to conduct and save your own tempo changes has never featured prominently on my radar. But to see and hear Tom play the same piece, while tapping tempo changes with his laptop spacebar, was a mini-epiphany. Click here to hear how the piece was transformed in less than a minute.

Keep in mind that this isn’t a final polished product: it’s the result of a live demo. No expressions or articulations have been added, both of which would further refine the playback. No effort has been make to fine-tune the reverb, panning, or levels. Nevertheless, at least for me, the playback came alive when the tempo was able to breathe and ebb and flow.

Have you witnessed Tom at a tradeshow or clinic? Have you been using Tempo Tap? Please share your experiences by clicking on “Comments” below!