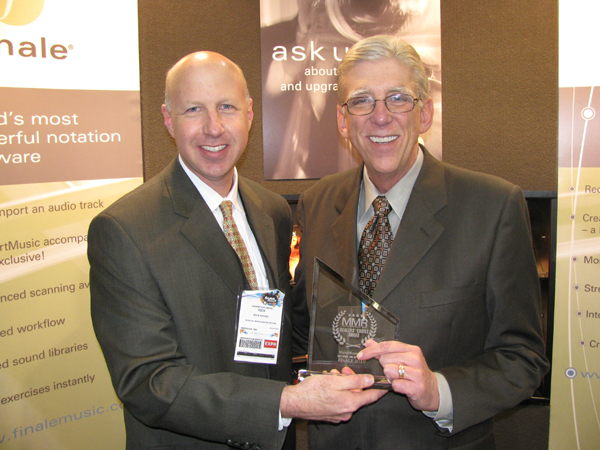 MakeMusic CEO Ron Raup receives the “Dealer’s Choice Award for Software Line of the Year,” on behalf of
Finale 2010, from Richard E. Kessel, publisher of School, Band and Orchestra. Photo by Eliahu Sussman.

Anaheim, California, was the home last week of the annual Winter NAMM tradeshow, where companies related to making music meet to display their latest products to musical merchandise dealers. NAMM also provides an opportunity for the industry to acknowledge achievements.

On Thursday, January 14, Richard E. Kessel, publisher of the School, Band and Orchestra, formally presented Ron Raup, MakeMusic CEO, with the Dealer’s Choice Award for “Software Line of the Year.” The award recognized Finale 2010 as the year’s top software line from the perspective of music instrument retailers across the country. (The award was announced in December: details can be viewed here.)

Finale 2010 was also the only music notation creation software nominated for “BEST NEW Music Software/Multimedia of 2009” by the Music & Sound Retailer, host of the 24th Annual Music & Sound Awards.

This year, for the third year in a row, music educators were encouraged to attend the last two days of the show as part of “Music Education Days.” Did you attend? Please share the highlights of your experience using the “Comments” button below.