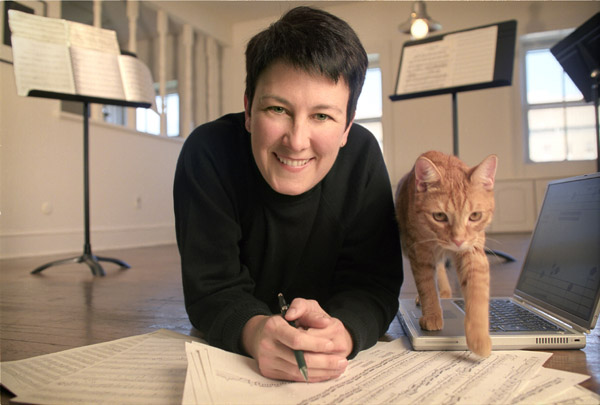 Jennifer Higdon and her cat, Beau. Photo by Candace DiCarlo

In a world where child virtuosi seem to get younger each year, Jennifer Higdon had a relatively late start in music. She taught herself to play flute at 15, began formal musical studies at 18, and didn’t begin to study composition until she was 21. This delay doesn’t appear to have negatively impacted her career: Today Jennifer is one of the most frequently performed living American composers.

The list of organizations who have commissioned her spans from the Philadelphia Orchestra to the St. Paul Chamber Orchestra; from eighth blackbird to the Tokyo String Quartet; and from The President’s Own U. S. Marine Band to such artists as Hilary Hahn.

She has been the recipient of many awards including a Pew Fellowship, a Guggenheim Fellowship, and two awards from the American Academy of Arts & Letters. This past January she added a 2010 Grammy Award to the list: A London Philharmonic Orchestra recording of her Percussion Concerto was named Best Contemporary Classical Composition.

I recently congratulated Jennifer on the Grammy Award and talked with her about her choice of music notation software.

“I’ve been using Finale for the past 16 years…pretty much every day of those past 16 years. I’ve found that the ability to adjust so many different things has made it possible for me to do complex graphics, and still be able to meet the MOLA guidelines that major orchestras require in their commissioning contracts.”

Some people assume that folks who earn their living by composing still work with pen and paper and hire others to enter their work into Finale. That’s not the case with Jennifer:

“I actually do my composing directly into the computer on the program itself. I consider Finale to be indispensable in my compositional process, and in the plying of my trade. I also run my own publishing company, and we sell on average 15 scores a week – so we print-on-demand, using Finale. So you might say I’m a fan!”

Additional details about Jennifer’s career, as well as information on purchasing or renting her music, can be found at http://www.jenniferhigdon.com